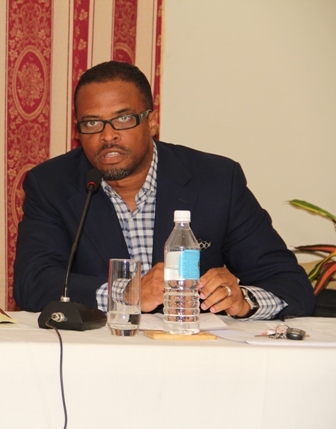 Deputy Premier and Minister of Tourism on Nevis Hon. Mark Brantley at a town hall meeting hosted by the Nevis Island Administration at the Red Cross conference room on November 07, 2013
NIA CHARLESTOWN NEVIS (November 08, 2013) — Deputy Premier and Minister of Tourism in the Nevis Island Administration (NIA) Hon. Mark Brantley welcomed news of another airline which has added Nevis to its itinerary, an arrangement he said would make up to 100 seats per day available to and from San Juan via the Vance W. Amory International Airport and described it as a significant achievement in difficult times.
A visibly elated Mr. Brantley told the audience at a town hall meeting, hosted by the NIA on November 07, 2013, at the Red Cross Building that word by Seaborne Airlines that it would commence operations from the Vance W. Amory International Airport from January 14, 2014 with daily flights to and from San Juan, Puerto Rico had come at a good time.
“I received a long awaited press release to announce that Seaborne Airlines will now be coming direct San Juan/Nevis as well. I am really happy because since American Eagle pulled out of Nevis some years ago, we have not had a big carrier. A lot of people say they are uncomfortable with the small planes and Seaborne takes, I think, 35 passengers and they will be coming in and out, that get from Nevis to San Juan in about 45minutes…
“When we got into office we met Cape Air doing a tremendous service and I want to congratulate Cape Air because they have stuck with us and they are doing a great service but Cape Air flies the seven-seater Cessnas and Cape Air afforded us a daily capacity of 14…
“With Tradewind, we have added 16 seats to that 14 so with Tradewind we have jumped to 30 seats per day into and out of San Juan and with Seaborne we are adding another 70 seats per day and so, this Administration in the short space of time that we have been there, have moved the goal post from 14seats a day into and out of San Juan to 100 seats per day and that, we feel, is a significant achievement in these challenging and difficult times,” he said.
According to Mr. Brantley, Seaborne would also afford the opportunity for fuelling since the flight which included St. Kitts would originate from Nevis and return to overnight.
“They are going to leave Nevis at 7 a.m. They are going to leave Puerto Rico at 3:25 p.m. Just so you understand, they have also included St. Kitts in that service so when they leave Nevis at 7 a.m. they go to St. Kitts and then on to San Juan.
“When they come back they go to St. Kitts and then on to Nevis. They overnight in Nevis so it also affords us the opportunity to do fuelling and the like in Nevis and so basically we see it as originating and ending in Nevis as a Nevis service,” he said.
The Tourism Minister used the opportunity to explain the critical importance of the San Juan hub to the Tourism Industry on Nevis.
“Wherever you are coming from in the United States you can get to San Juan and the United States continues to be our major market for tourism and we felt that that hub was being neglected and yes, we have an increased airlift into St. Kitts and clearly that has served and for those who wish to use that route that’s available. The difficulty that we have with the airlift into St. Kitts at this point is that the new schedules that American Airlines has announced get passengers into St. Kitts late at night after 9:00 and they leave St. Kitts just after 8:00 in the morning.
“The difficulty therefore, is if you are a local traveller travelling from Nevis, there is no way you can get to St. Kitts in time to check-in, if the flight is leaving at 8 a.m. So you would either have to take a water taxi at 4 to 5 a.m. or you have to go to St. Kitts the night before and spend a night in St. Kitts in order to take that flight. Equally when you come back if you are landing after 9:00 at night, all the ferries have gone, you therefore either have to take a water taxi home or you have to overnight in St. Kitts. So there is a potential for Nevisians travelling and residents in Nevis to have to do two nights in St. Kitts just to get in and out,” he explained.
Mr. Brantley further noted that visitors to the island from the United States were equally affected by the new AA flight schedule and San Juan provided the perfect alternative.
“For our tourists it’s a problem as well because if you are coming in after nine at night, by the time you get through immigration and customs and you get a ferry over it’s midnight, you are ready to go to bed but you would have had to pay for that hotel room for that night. Then when you are leaving you probably have to get on that water taxi at 4 to 5a.m. and again you have wasted another night hotel room.
“Already some of our hotels are complaining that their guests are demanding that they discount their stay because they feel like they are paying for two nights that they are not really going to use.  So we need some alternatives and Puerto Rico provides for us the perfect alternative because all the airlines get into Puerto Rico. There are great fares into and out of Puerto Rico and so we set about increasing our airlift and so I am very, very happy that we have been able to push this from 14 to 100 in a very short space of time,” he said.