Deputy Premier of Nevis and Minister of Tourism Hon. Mark. Brantley at a town hall meeting hosted by the Nevis Island Administration at the Red Cross conference room on November 07, 2013
NIA CHARLESTOWN NEVIS (November 08, 2013) — Deputy Premier of Nevis and Minister of Tourism Hon. Mark Brantley urged Nevisians to resume use of the Vance W. Amory International Airport, now that the Nevis Island Administration had attracted new airlift to the island’s only airport.
At a town hall meeting hosted by the Nevis Island Administration (NIA) at the Red Cross Building on November 07, 2013, Mr. Brantley stated that the Facility had been left to languish and the sitting Administration was delivering on its promise to address the issue expeditiously.
“I would like to encourage our people to use the Vance Amory International Airport. We now have the airlift I want you to use it. It is your airport; it is your airlift; use it and use it and encourage others to use it, so that we can get life injected back into the Vance Amory International Airport.
“It is our airport. We have paid for it. Our Leader’s name is on it and I believe that we have a duty to use it and ensure that it’s a success. So I invite the public to use the services that we have negotiated and that are now coming into the airport,” he said.
The Tourism Minister had announced the coming of Seaborne Airlines to the Nevis Airport from January 15, 2014. It will join Tradewind Airlines which just days before began flying the San Juan/Nevis route and other airlines that had serviced other hubs north of the island.
“In so far as air service is concerned, we continue to be served by Winair out of St. Maarten and I can assure you that we will be engaging with Winair and others to see if we can increase the airlift into and out of St. Maarten which is also an important hub.
“We have Costal Air which continues to come out of St. Croix. We have Air Sunshine which is a seasonal service but which we hope will restart in November…,” he said.
However, regarding airlift southward from Nevis, Mr. Brantley spoke of the Leeward Islands Air Transport (LIAT) and the establishment of other long term partnerships for that route. 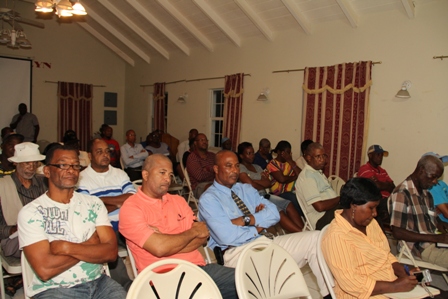 “We thank LIAT for the service that they have given us. We hope that we will be able to see them again on January 15th as they have promised but this Administration has not rested and I am very happy to say, that just tonight I had a lengthy conversation with the Chief Executive Officer of SVG Air and they are very keen on coming in to serve Nevis and do that Antigua/Nevis bridge for us.
“I just want to assure the public that we are looking for long term partnerships. We are not just looking for somebody to come in for the six weeks. We are looking for long term partnerships with airlines, to serve our people into and out of Antigua; into and out of St. Maarten; into and out of San Juan, Puerto Rico. We feel that if we have those links, then the world becomes our oyster and so I wanted to make that very clear,” he said.
Just one day before the meeting, the Minister announced LIAT’s intention to suspend service from the Vance W. Amory International Airport from December 03, 2013 to January 14, 2014. He was informed by way of a latter from LIAT’s management dated November 01, 2013.