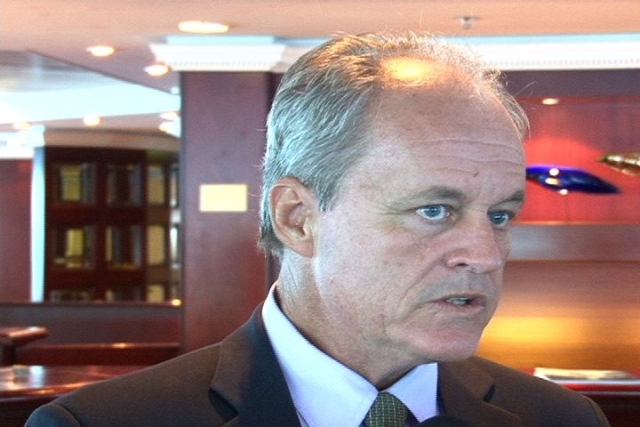 NIA-CHARLESTOWN NEVIS (March 09, 2011) — Work of personnel from the Ministry of Tourism on Nevis has begun to bear fruit. That view was expressed by Tourism Advisor to the Nevis Island Administration (NIA) Mr. Alistair Yearwood, when the Azamara Journey cruise liner made its first call to Nevis on Monday with 644 passengers and a crew of 439 while on its inaugural voyage.

The Tourism Advisor told the Department of Information in an interview on board the ship, that the ship’s first visit was an indication that Nevis had began to attract larger cruise lines and lauded the efforts of those he said were responsible.

“This actually shows the work the Ministry of Tourism is doing especially Tameka Lawrence, in that Nevis has traditionally attracted very small ships and the sailing ships. As I am sure the public is aware, Windjammer Cruises went bankrupt some time ago and so we have seen a decline in the number of small cruise ships.

“Now the trend in the world the cruise lines are building larger and larger ships so for instance Royal Caribbean that owns this line has the largest ship in the world which I think was in St. Kitts a couple of days ago. So Nevis has to follow that trend and through the work of the Ministry of Tourism, ships like the Azamara are now being attracted and this is one of the smaller larger ships. In other words instead of carrying 6,000 passengers, its 644 passengers which is much larger than the ships we are accustom to get,” he said.

According to the Advisor, the Ministry of Tourism through Tameka attended most of the cruise shows which helped build relationships with the cruise executives, to attract more of those ships with high quality, that were slightly larger than those in the past and which carried high end cruise visitors.

Mr. Yearwood further explained that attracting the smaller of the larger cruise liners which catered to a luxury cruise market, was exactly what Tourism officials had aimed for and had targeted its marketing towards over the years. 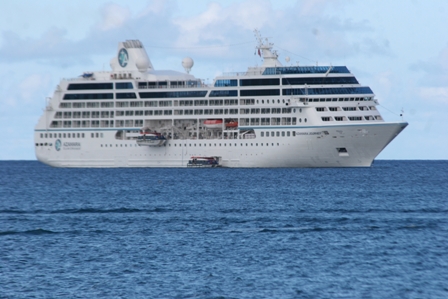 The Azamara Journey cruise liner docked at the Charlestown Port

Marketing had continued to show Nevis as a high end destination and according to the Tourism Advisor most of the 644 passengers who came ashore from the Azamara were at the higher end and therefore had a larger spending power.

He said the ship had specifically targeted smaller islands rather than the large mass cruise ports like St. Maarten and St. Thomas. On its current journey he said the vessel had been to St. John, St. Barts and St. Johns Antigua before docking in Nevis. It was expected to travel to Virgin Gorda on its departure from Nevis.

Meantime, in an invited comment, Mr. Yearwood said the Azamara’s visit to Nevis would positively impact the economy of the island because of the greater number of passengers it brought to the island’s shores.

He also used the opportunity to speak to the challenges posed by the ship’s visit and how they were managed and praised those agencies responsible.

“I didn’t see anybody milling around, I didn’t see anybody having to wait for a taxi. What I saw is an incredible display from the masquerades. It seems as though everybody around the Port was taking today very seriously and everything so far has been moving extremely efficiently. Obviously we can’t wait till we get the feedback from the ship which we will get and I am sure there will be room for improvement but my personal observation is, yes, there were tremendous challenges but they have been met extremely efficiently,” he said.