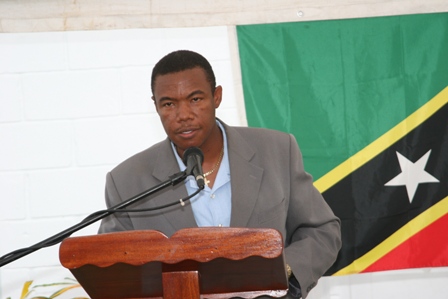 Minister of Trade and Industry in the Nevis Island Administration Nevis Hon. Dwight Cozier at the renaming ceremony of the Supply Office at the Pinneys Industrial Site

CHARLESTOWN NEVIS (May 28, 2010) — Junior Minister of Trade and Industry  in the Nevis Island Administration (NIA) Hon. Dwight Cozier, said at the renaming ceremony of the Supply Office that the legacy of self sacrifice left behind by his late predecessor, was neither lost nor forgotten.

At a moving ceremony to mark the official name change to the Levi E. Morton Building at the Pinneys Industrial Site on Wednesday, Mr. Cozier said the Ministry of Trade and Industry had grown from the foundation set by Mr. Morton during 1983 -1987.He said he was proud to support the effort to name the Nevisian landmark in honour of Hon. Levi Ezekiel Morton, the island’s first Minister of Trade and Industry.

According to the sitting Trade and Industry Minister, Mr. Morton set up the Ministry of Trade and Industry on Nevis and was charged with the formation of the Nevis Supply Office, which regulated the price of basic food items in keeping with the needs of the people of Nevis.

“The present operations of the Supply Office flows from the work of the hero we call the Sheriff, the man called Levi Ezekiel Morton and he did this between 1983and 1987. The Ministry of Trade now has attached to it an increasingly organised Consumer Affairs Department… It is efficiently run to control the price of basic food products which was a stated intention of the 1970 Treaty of Chaguaramas…Levi Morton was instrumental in staking that intention right here in our beloved Nevis.

“The Ministry also boasts the Small Enterprise Development Unit which has attached to it the Entrepreneurial Development Fund, a fund even in these trying economic times has done remarkably well in extending to small business class Nevisians a number of loans. It is our task in this Ministry to ensure that these loans are managed, are repaid so that the revolving fund can continue,” he said.

The Trade Minister also attributed the benefits of the Entrepreneurial Development Fund to the small business sector on Nevis to the selfless contribution of Mr. Morton.

He announced that for the second time in less than two years, another $1million in loan funding would be made available to the small business sector of Nevis through the Entrepreneurial Development Fund.

The Trade Minister further reflected on Mr. Morton’s contribution to the development of Nevis and his virtues. 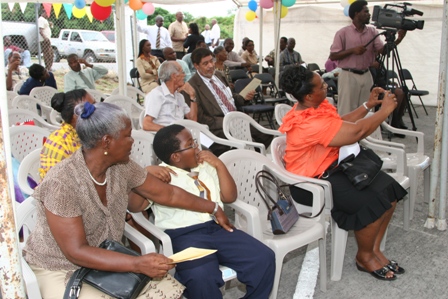 A section of persons including Government officials and family of the late Levi. E. Morton just before the start of the official renaming ceremony of the Nevis Supply Office

“Rather than criticise he contributed to what is today our reality. He put aside arrogance and prosperity and adopted humility and dedication to the beloved island we call Nevis,” he said.

Mr. Cozier noted that Mr. Morton was born in St. Kitts but was Nevisian at heart and pointed to the many hats he wore in the community- teacher, accountant, politician and leader.

“Levi was such a politician that he is reputed to have kept a meeting in Fountain by himself.  Thus was his commitment to not only the Nevis reformation Party but his commitment to the people of Nevis, be they urban or rural. He was a forceful and articulate speaker, who confronted the Opposition on issues not on personalities. He was close to the people. Levi Morton anchored the Nevis Reformation Party amongst the grass root of Nevis. His political service was selfless,” he said.