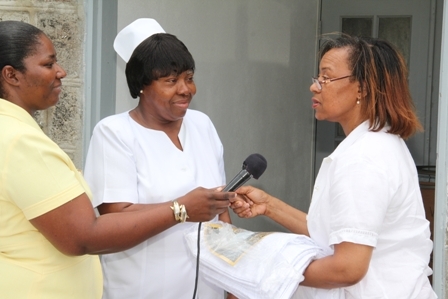 Nevisian Mrs. Marilyn Walters-Drew (r) hands over gift to Nurse Adrienne Ward for patients of the Alexandra Hospital and residents of the Flamboyant Nursing Home on Nevis. Hospital Administrator Ms. Grace Elliott (extreme left) looks on
NIA CHARLESTOWN NEVIS (April 23, 2012) — A Nevisian who resides in the United States continue to donate items to the Alexandra Hospital and the Flamboyant Nursing Home on Nevis.

On April 19, 2012 Mrs. Marilyn Walters-Drew of Rawlins Village, personally presented a gift including bed linen, toiletries and pantry related items to Nurse Adrienne Ward for those health facilities on Nevis and explained the reason behind the gesture.

“I visited my mother at the Alexandra Hospital in 2012 and recognised the need for some white sheets. I spoke to Matron Dias and told her of my wish to help and that I would like to donate some white sheets. She told me the size and on my return to New York, I purchased them.

“While on Nevis I also spoke to Miss. Myris Morton at the Flamboyant home and she gave me an idea of the sort of things I could purchase for the home. About a week ago, I was able to post those things home,” she said. 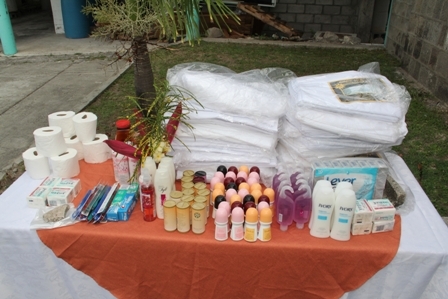 In response, Nurse Ward registered gratitude on behalf of the patients at the Hospital and the residents of the Home and thanked Mrs Walters Drew for her kind gesture.

She said the items came at a good time and would be used in the interest of both patients and residents.

The gift was handed over on the Hospital compound in the presence of Hospital Administrator Ms. Grace Elliott.