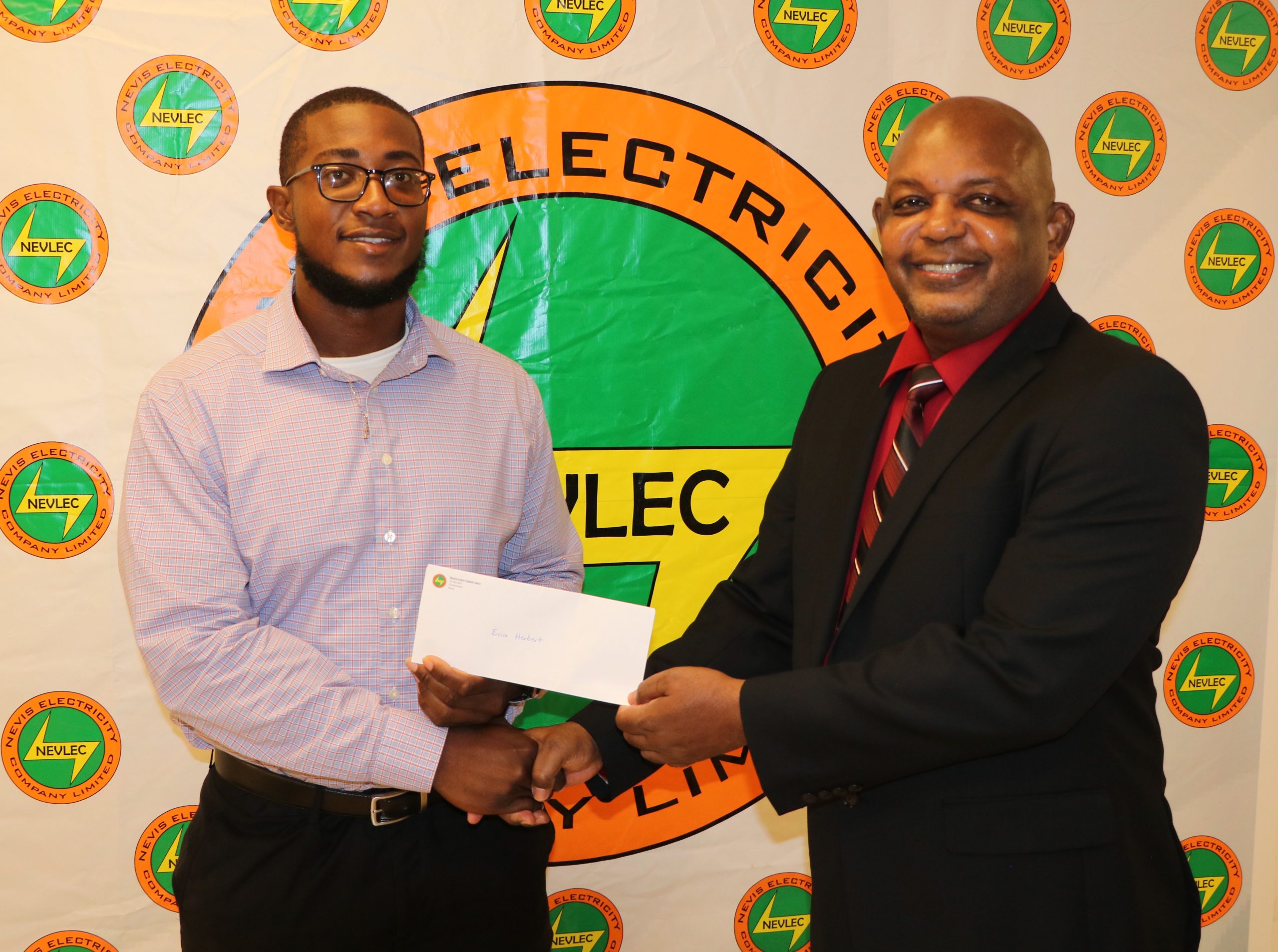 The Cedric A. Armbrister Scholarship offers $10,000 per annum to the recipient to study Electrical or Mechanical Engineering at the University of the West Indies (UWI).

During an award ceremony held Thursday, August 18, 2022 in the Conference Room at the Social Security Building, Premier Hon. Mark Brantley, Minister of Human Resources, and Public Utilities and Energy in the Nevis Island Administration (NIA), said it was heartening to see that NEVLEC has progressed to the stage where the company can assist an aspiring young Nevisian to realize his dream of pursuing tertiary education.

He lauded the NEVLEC Board and management for seeing it fit to invest in the people of Nevis and for doing its part to move the island forward. He wished young Mr. Herbert every success at university.

“Upon completion of your studies Mr. Herbert the island of Nevis will be looking to you as one of its assets in the quest to make the provision of energy on Nevis even more efficient and sustainable. This opportunity cannot be taken for granted, as our future as an island nation depends on skilled human resource who will revolutionize the sectors in which they function,” he said.

Mr. Albert Gordon, General Manager of NEVLEC, presented the scholarship to Mr. Herbert. He congratulated the awardee and pledged the support of the NEVLEC Scholarship Team throughout his academic sojourn at UWI’s St. Augustine Campus in Trinidad.

“Aside from the financial support we will be providing to you we will be there for you. During the breaks you will be able to work with NEVLEC and if at any time you need anything we will work with you…If you have any challenges let us know and in any way that you think we can assist you, just let us know.

“It’s good that you are undergoing this transformation in your life at this time and I urge you to focus… All of us have these very great expectations but from I’ve seen I know you will deliver with the proper support,” he said.

Mr. Stedmon Tross, Chairman of the NEVLEC Board of Directors, offered brief remarks, noting that he was pleased the first scholarship was being awarded to such a worthy young man, as NEVLEC’s aim is to have a cadre of qualified engineers to move the company into the future.

The scholarship, which serves to memorialize the contribution NEVLEC stalwart the late Mr. Cedric A. Armbrister made to the utility company and the island of Nevis, will be offered every three years to one Nevisian meeting the requirements.

Mr. Clive Armbrister rendered a profile of his father, speaking to his passion and commitment to the job as an engineer and former general manager of NEVLEC. The late Cedric A. Armbrister has been credited for being an integral player in the establishment of the utility company and bringing electricity to citizens and residents all across the island of Nevis.

Mr. Herbert expressed his gratitude to NEVLEC, the Armbrister family, and his parents Mr. Laughton Herbert and Mrs. Michele Herbert, vowing to return to Nevis upon completion of his studies to make his contribution to the development of the island.

“Thank you very much for this opportunity presented to me. I can assure you that this scholarship will be put in its best capacity, and at the end of my studies it will help me to come back here on the island of Nevis to better the NEVLEC team and Nevis on a whole,” he said.

Also present at the ceremony were Mrs. Lillian Armbrister, widow of the late Cedric A. Armbrister, along with his daughter Mrs. Donna Sargeant; government officials; and members of the NEVLEC management and staff.