Hon. Alexis Jeffers Minister responsible for Public Utilities on Nevis (extreme left) takes a first-hand look at the new 3.85 megawatt-Wӓrtsilӓ generator being unloaded at the Nevis Electricity Company Limited’s Power Plant at Prospect on June 27, 2017
NIA CHARLESTOWN NEVIS (JUNE 27, 2017) — Installation of the new 3.85 megawatt-Wӓrtsilӓ generator at the Prospect Power Plant has commenced. The US$5 million engine arrived on Nevis on June 24, 2017. It was shipped by the manufacturers in Finland on April 20, 2017.
Hon. Alexis Jeffers, Minister responsible for Public Utilities in the Nevis Island Administration (NIA) made the announcement on June 26, 2017, in a further update on the status of the installation process for the new engine
Some months ago, the Nevis Electricity Company Limited (NEVLEC) with support from the NIA, purchased the engine in a bid to provide a more reliable supply of energy on the island.
The Minister said he is so far pleased with progress and thanked the public for their patience.
The new engine is expected to be installed by July 22 and ready for the testing phase. 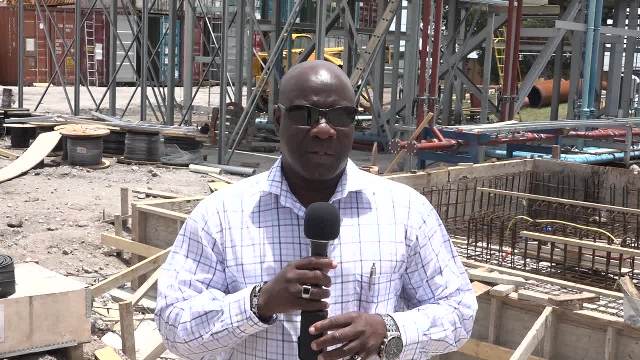 Meantime, Mr. Jeffers noted that significant work has been done on other generators at the power plant they were force to put off grid.
“We have made significant improvement with some of the difficulties we had on a couple of the Mirrlees [Blackstone] generators.
“Currently, work is being done to rebuild one of the generators that had an issue with the crank shaft. That is almost there. I believe, over the next two weeks they should be done with the complete rebuilding of that engine,” he said.