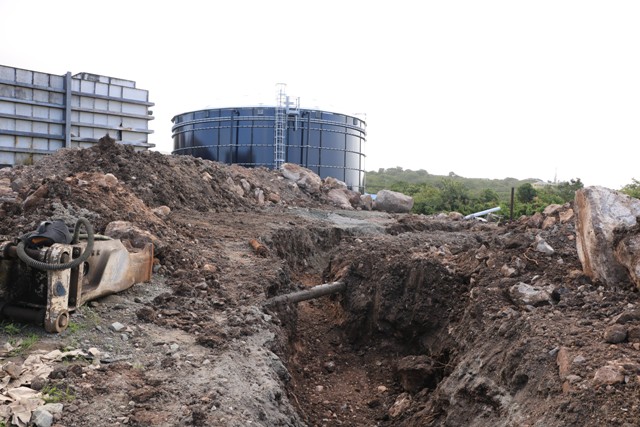 Ongoing trenching work being done on site at the Hamilton Reservoir on February 19, 2020, for the installation of water mains from the new steel gas fused 400,000 gallon water there which will feed Charlestown, Craddock Road and Hamilton Estate

NIA CHARLESTOWN NEVIS (February 20, 2020) — Work continues apace in the Water Enhancement Project at the Hamilton Reservoir compound, and the installation of distribution mains to and from the newly-constructed steel gas fused 400,000 gallon water tank has commenced.  It will replace the existing fiberglass tank.

During a visit to the work site on February 19, 2020, Mr. Floyd Robinson, Manager of the Water Resource Management Department, spoke to the Department of Information of the status of the project to date.

Another component of the project to produce more water for the island included redeveloping the Hamilton well which has been in a state of rest for almost 10 years after it was drilled, due to its high manganese content in the water and could not be used.

The Nevis Water Department conducted tests on the well to ensure that it had retained its ability to provide a robust supply of water.

“We did pump test the well for about a week to make sure that it was still consistent, and we are satisfied that we are going to be able to have sustainable water from that well at about 230 gallons per minute.  That’s equal to over 330 gallons per day.

“So the well test has been completed and we are just waiting for this part of the project to be done [water main installation], and then with the old reservoir being dismantled the filtration system will be installed. The filtration system is going to remove the excess manganese that is currently in the well that we just developed,” he said.

Regarding the installation of the filtration system, Mr. Robinson noted that dismantling of the fiberglass tank is expected to commence during the week of February 24, 2020, once there are no further delays due to the recent out-of-season rains.

“We are awaiting two back wash tanks which are soon to be here but the major components of the system are already on island. It has about five different parts that go together to make the system and…even before everything is here, we can start installing different components. So we are just waiting for the tank to be dismantled and then the filtration system will be erected,” he said.

Construction for the system is expected to take about 30 days once there are no weather delays after which it will be up and running.