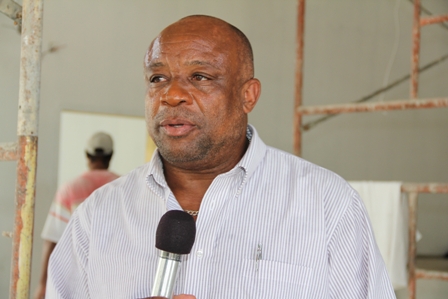 NIA-CHARLESTOWN NEVIS (June 06, 2011) – The new approach to community development on Nevis marks a new era in the island’s growth. That view was expressed by Minister responsible for Social Development in the Nevis Island Administration Hon. Hensley Daniel as he toured five new community centres under construction on Thursday.


Accompanied by Permanent Secretary in the Ministry of Social Development with special responsibility for community centres Mr. Alstead Pemberton and Advisor to the Ministry Mr. Halstead Byron, Mr. Daniel said the construction of the Jessups, Cotton Ground, Barnes Ghaut, Fountain and Combermere community centres was in keeping with the Administration’s focus on people.

The Minister explained that the NIA had undertaken a programme to redirect the communities in Nevis and provide for them focal points in the form of community centres. 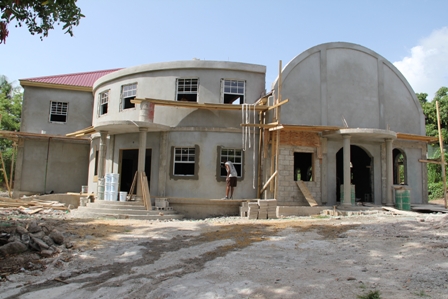 He said the Nevis Reformation Party led-NIA regarded community development as central to the stabilisation of the society, central to crime reduction, to building a sense of oneness and a sense of community so on its returned to government the Community Development Division, a separate unit from government was reactivated with the task to develop programmes at the community level.

“I believe this government by focussing on community development is sending the right message and is sending the message to the rest of the public that we are our brother’s keeper and we have to develop the kinds of programmes which separate us and make us good as Nevisians,” he said.

At his first stop in Jessups, Mr. Daniel noted that provisions were made for a hall, library, training rooms and computer rooms and acknowledged his satisfaction with the pace of the project which was nearing completion. He also pointed to the types of programmes that would be available at the centre.

“May I just remind the public that we have leadership training programmes in music, dance and drama, computer education, public education, leadership training, conflict resolution and anger management are some of the things we have prepared already to implement in these centres,” he said. 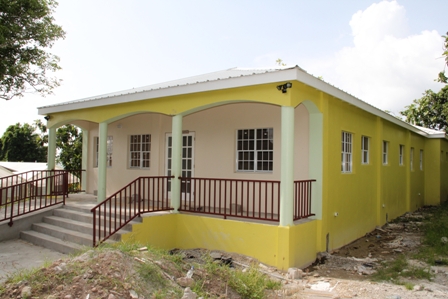 Mr. Daniel noted with certainty that the people of Jessups would be proud of the Government and would show appreciation in the upcoming local election because in all the years of Government on Nevis since 1983, it was the first time that any government had erected a community centre there.

On the second stop at the Barnes Ghaut community centre construction site the Social Development Minister explained that on completion the facility would focus heavily on training.

The first of its kind in the community, the new community centre the Minister stated was an outgrowth of work of the Barns Ghaut Education Committee which was established by the NIA in the late 1980s. The centre will also be outfitted with its own manager who will be charged with the development of programmes for the community in consultation and in conjunction with the wishes of the people of the community

According to Mr. Daniel, the group continued working under adverse conditions and the sitting NIA was pleased to provide the centre with finding from the Caribbean Development Bank through its Basic Needs Trust Fund Programme. 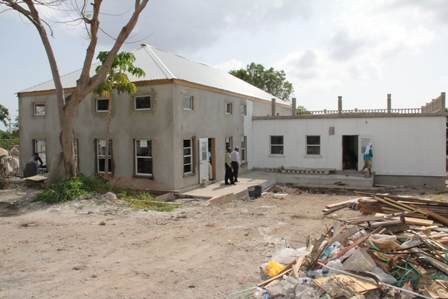 The third stop was at Cotton Ground, another community which never before had the opportunity to enjoy the benefits of a community centre.

“The people of Cotton Ground will know that this is the first time in the history of government in Nevis that a community centre is provided for them and we are happy to do this. We recognise that the centre will become the focal point for life in the community and we have the programmes ready. We are more than happy to be able to offer the people of Cotton Ground the opportunity to grow and develop at the community level…

“We are satisfied that these centres will help us to promote social cohesion, will help to reduce crime and violence, and will promote the kind of bonding and the kind of community relations of which we will be all happy,” he said.

On his stop at Fountain, Mr Daniel explained that the task there was to reconfigure the existing facility.

“We have had to remake this building in order for it to have some semblance of the community centre. I must point out the tremendous waste of money that took place here because the initial building had to be totally reconfigured. 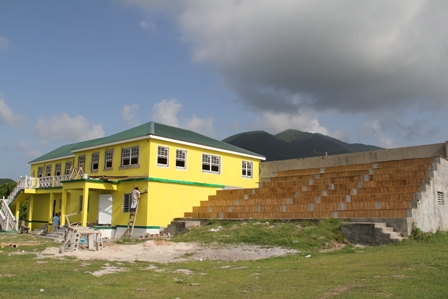 “It speaks to the last government’s inability to plan, inability to understand the critical issues involved in developing a community centre and as a result we have had to come here and do this building over,” he said.

However, the Minister explained that the new facility had appropriate rooms for training, computer and public education.

“We say all the time community development is purposeful planned change from the bottom up involving people at all levels of the society and as such we look forward with the people of Fountain to be able to use this building.

“We have been cheated because this building has had to be redone at a cost to the tax payers and the people of Nevis must understand that,” he said.

The last leg of the tour was ended with a visit to the Combermere community centre in the heart of the village where Mr. Daniel expressed satisfaction with the progress of construction.

He said he expected the people of the area to be please because for them it was the very first community centre erected in the St. James Parish. He used the opportunity to praise Area Representative Hon. Patrice Nisbett who he said pushed for the people from that area. 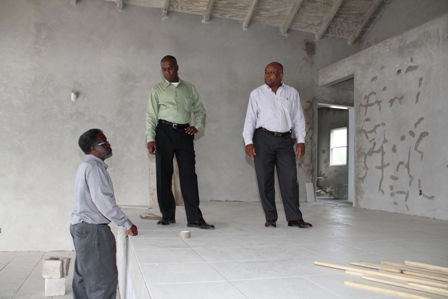 However, the Minister urged persons in the community to make use of all the opportunities that would be provided to them on completion of the facility.