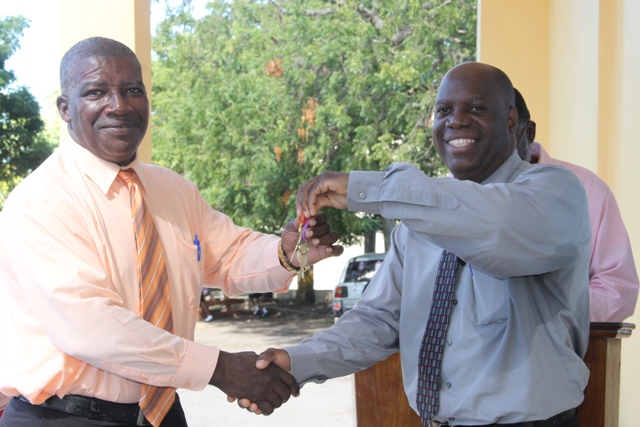 Mr. Edson Elliott, Education Officer in the Department of Education who is responsible for secondary schools at a handing over keys to the new addition to the Charlestown Secondary School to Principal, Mr. Juan Williams at a handing over ceremony at the school compound on December 13, 2017

NIA CHARLESTOWN NEVIS (December 14, 2017) — A new set of classrooms “Block A” at the Charlestown Secondary School (CSS) has been commissioned. The keys to the building was handed over to Principal Mr. Juan Williams by Mr. Edson Elliott, Education Officer in the Department of Education who is responsible for secondary schools at a handing over ceremony on the school’s premises on December 13, 2017.

The completion of the building, brings to an end the first phase of a project to revamp the physical structure of government owned learning institutions on the island. Hon. Troy Liburd, Junior Minister in the Ministry of Communications and Works, in brief remarks said the project was conceptualized in 2015 but the work was delayed.

“As schools get usage there’s wear and tear… In 2015, Mr. Raul Pemberton [Director of the Public Works Department] was given the task to come up with a plan to do renovations on the [Charlestown Secondary] School.

“This building we have here to hand over now, was significant and could not be done at that time. Therefore, plans were put in place to come back and put those renovations in place [and] 2017 was the opportune time. So Public works put their plans in place to have the work done over the summer,” he explained.

The Junior Minister stated that when construction commenced shortly after the 2017 school year ended, the intention was to have it completed by early September. However, the timeline was hampered by inclement weather from the passage of Hurricanes Irma and Maria.

Hon. Vance Amory, Premier of Nevis and Minister of Education in the Nevis Island Administration (NIA), in brief remarks, expressed satisfaction with the finished product and admonished the students to care for and maintain the facility.

He noted the significant improvement of the facility and thanked the supervisor, staff and parents for their patience. He asked the staff to continue to work with the students.

Mr. Amory, urged students to care for the facilities because they are costly to maintain.

The school’s principal thanked the ministry for providing additional space at the school for its growing population.

He used the opportunity to appeal to the students to care for the school compound and assured that the new block and the entire CSS compound would be cared for.

The handing over ceremony for the new block comes on the heels of another ceremony at the Gingerland Preschool on December 12, 2017.

Other remarks were made by Mr. Kevin Barrett, Permanent Secretary in the Ministry of Education and Mrs. Palsy Wilkin, Principal Education Officer in the Department of Education.