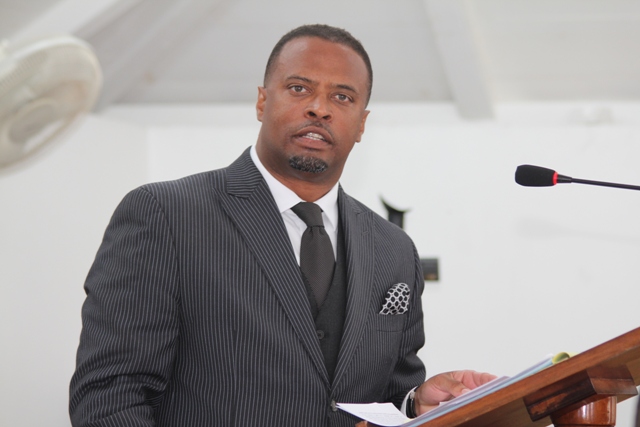 Deputy Premier of Nevis and Minister of Tourism Hon. Mark Brantley at sitting of the Nevis Island Assembly (file photo)
NIA CHARLESTOWN NEVIS (December 13, 2016) — The Nevis Island Administration (NIA) through the Ministry of Tourism, continues to make strides in enhancing the visitor experience on Nevis.
Deputy Premier and Minister responsible for Tourism Hon. Mark Brantley said at the recent sitting of the Nevis Island Assembly, that in terms of security, a Beach Security system has been implemented on Pinney’s Beach, the island’s main beach.
“Close Circuit Television (CCTV) cameras have been installed there to compliment the work of the security officers.
“It is critical that patrons to the beach have a safe experience. We have employed an additional four security officers on the beach and police patrols are now conducted every two hours, owing to the new and ongoing partnership between the beach security officers and the Cotton Ground Police Station,” he said.
In addition, he said they have established free internet access for beach users at Pinney’s Beach and there are plans to invest, for the first time, in lifeguards who would be strategically positioned along the beach.
Mr. Brantley also stated that there are plans to invest in a beach sweeping machine in 2017, to clean the beach in the early morning.
The Tourism Minister also spoke to upgrades at other tourist attractions on the island among them the Waterfalls at Russell’s Rest in Maddens and Maroon Hill in Gingerland.
“Russell’s Rest in Maddens, that attraction, in the new year, we hope to have officially named and designated a national park in keeping with our sustainable tourism thrust. We want an orientation booth, visitors’ facilities and schedule maintenance of the trails with some signage and interpretation.
“Maroon Hill, we are upgrading the trail there. We are doing some signage and we are creating some viewing platforms and benches,” he said.
Mr. Brantley added that in terms of signage, there will be a comprehensive island wide upgrade of all tourist, village and attraction signs.
He also noted that Charlestown would become a free Wi-Fi zone for tourists by the end of 2016, because of a partnership with internet service provider Digicel.