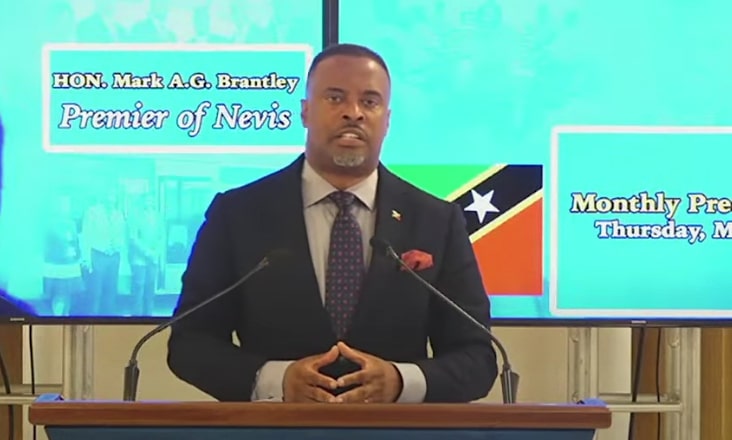 Premier Hon. Mark Brantley, Minister of Finance in the Nevis Island Administration discusses attempts to mitigate the rising cost of food on Nevis during his May 26, 2022 press conference

NIA CHARLESTOWN NEVIS (May 31, 2022) – In its efforts to mitigate the impact of rising food costs on the people of Nevis, Premier Hon. Mark Brantley, Minister of Finance in the Nevis Island Administration (NIA), led a team at a recent meeting with representatives from the three major supermarkets on the island to discuss the issue.

The meeting took place on May 24, 2022. The Minister, who was accompanied by Mr. Colin Dore, Permanent Secretary and Mrs. Joan Browne, Principal Assistant Secretary in the Ministry of Finance; Mr. Cynric Carey, Deputy Comptroller of Customs; and Mrs. Mentrice Arthurton, Director of the Department of Trade and Consumer Affairs, met with representatives from Best Buy Supermarket, Ram’s Supermarket, and Horsford’s Valu Mart.

Premier Brantley said the importers revealed that even with the NIA’s relief measure to waive all Customs Duties on corned beef, pasta, sardines, tea, coffee, bacon, sausages and similar breakfast meats, cheese, chicken, milk, rice, flour, fruits and meat effective May 18, 2022, it would not redound to any significant reduction in the cost of food items.

“Listening to them it was very disheartening, because they were telling me that despite our genuine efforts at removing duty on all these items, they said if you remove all the duty and all the Customs Service Charge it still would not make much of a difference to the price. The reason for that they say is because every single week the prices go up…

“The supermarkets themselves are telling us that they are going through a very difficult period right now simply keeping up with the constantly changing prices. They are saying they can’t even forecast to say ‘This is what a pound of chicken is going to cost’ because every week they order chicken the price goes up on them, and then added to that you have the price of shipping which also continues to escalate and so those two factors are causing severe damage,” he explained.

He continued, “So it’s a very difficult situation and I had thought, and the good people in the Ministry of Finance had thought that those measures would assist, and they are saying those measures, while good, will not move the needle very much.”

Mr. Brantley said the supermarkets made some recommendations which the NIA would have to carefully examine as the government continues to pursue efforts to provide relief to the buying public.

“It was for me a very sobering and difficult meeting because hearing directly from the supermarket owners what they are having to endure I realized that we need to go back to the drawing board if we’re going to come up with something that you and I and other shoppers are going to see in terms of reduction in prices or stabilization in prices on the supermarket shelves.

“So the problem that we’re having is that world prices keep escalating. It’s a serious problem we’re having in terms of supply chain issues… and it’s difficult for me to stand here as Premier and tell you that I have an answer simply because there are so many moving parts internationally which impacts what winds up on our shelves here in our supermarkets.”

He appealed to local farmers to take agriculture seriously and redouble their efforts in terms of getting food to the market. He also urged consumers to buy locally produced food as much as possible.

The Premier reiterated the importance of food security on Nevis as external factors outside the control of government and the wider society continue to wreak havoc on the price of food imported into the island.

“If our eating, which is essential for our living, continues to be dependent of food imported from overseas, when issues outside our control happen and that food either becomes unavailable or the price goes out of control it means that the effect on us is difficult and can be disastrous, unless we start to ensure that we have import substitution.”