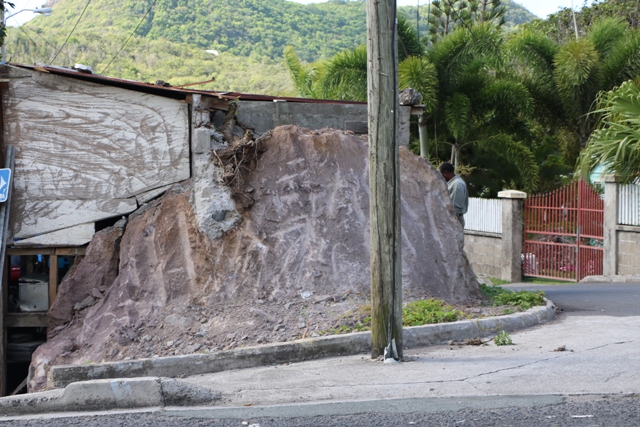 The improved intersection with the Island Main Road at Chicken Stone in Gingerland on August 20, 2019

NIA CHARLESTOWN NEVIS (August 20, 2019) — At least one motorist from the Gingerland area on Nevis is expressing satisfaction with recent improvements made to the Chicken Stone junction by the Ministry of Communications and Works in the Nevis Island Administration (NIA) for the safety of motorists and pedestrians using the area.

Mr. Everton “Judges” Liburd, a bus driver and owner from Rawlins Village, told the Department of Information on August 20, 2019, he is pleased with the work.

“I would be able to see a lot better in terms of coming out from the junction entering into the main road.

“In the past it has been a problem; you have to come all the way out in the road to see what’s coming from the opposite direction,” he said.

Hon. Spencer Brand, Minister of Communications and Works, who visited the area on August 20, 2019, said the decision was taken to tackle the issue which over the years posed major challenges for motorists traversing the area and was of grave concern to the traffic authority on the island.

“It is well documented that over the years this intersection has created a challenge for motorists, and we have had some fatal accidents here, one as recent as February of this year, and it became of utmost importance that we had to do something about this intersection.

“The ministry would have written to the property owners and sought their permission in order to take some remedial action here. We would have removed sections of the rock and we would have removed a portion of the mechanic shop that was here for many years, in an effort to try and improve the visibility at this intersection,” he said.

Mr. Brand used the opportunity to expressed gratitude to the Clarke family for allowing the NIA to make the necessary adjustments to their property to allow for the improved visibility at Chicken Stone.

“I want to say to them that the government and people of Nevis are indeed thankful and grateful for their partnership as we seek to improve the safety for motorists,” he said.

Meantime, Mr. Denzil Stanley, Principal Assistant Secretary in the Ministry of Communications and Works, who accompanied the minister during the visit, spoke of the actual work done by the Public Works Department to improve the area.

He stated that work had commenced on the project in July just before the Culturama festivities.

“We took off a section of the rock about 6 to 8 feet of the rock and what we have here now, simple as it is, a much improved intersection… Part of the work too entailed taking off a piece of the garage shed right next to us. That too had presented a problem in terms of the view of traffic coming from that end,” he said.