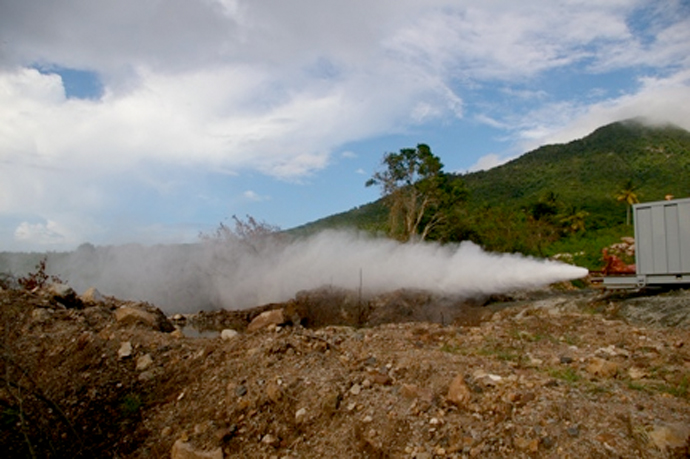 Testing of the geothermal well 3 in Hamilton, Nevis in 2018

NIA CHARLESTOWN NEVIS (February 25, 2021) – – The Nevis Island Administration (NIA) is in the final stages of renegotiating its current geothermal arrangement.

That is according to Hon. Mark Brantley, Minister of Finance and Energy in the NIA, during his monthly press conference on February 25, 2021.

“We had a meeting yesterday [February 24] with the technical team on Nevis, the legal team, NEVLEC [Nevis Electricity Company Ltd] and others, and we are actually at the end stages now of completing our renegotiation, because that’s what we have been engaged on.

“We had some minor points left to renegotiate. There is a new player that has come in as an equity partner, a company called Albioma, and we are working with all of these different lawyers and different individuals to ensure we have the best possible deal for the island of Nevis going forward.

“So far from abandoning the project, we are actually prepared to move forward with the project…The project is definitely on,” he stated.

The Premier pointed out that the government’s pursuit of the renewable energy source did not impede its continued upgrade of the island’s electricity company.

“Notwithstanding that we are committed to geothermal, we have not stopped trying to upgrade NEVLEC, so the two things aren’t mutually exclusive.

“We have continued with the upgrades at NEVLEC. In fact, I would have advised recently that the government took a decision to purchase another Wärtsilä engine to ensure that we have sufficient capacity at NEVLEC to carry the island.

“So we are not putting, if you will, that on hold while we wait for geothermal. We are saying that we should have the capacity and if and when geothermal comes, then we do the necessary switching over to renewables. That is the ultimate goal but in the interim we continue to upgrade,” he said.

Mr. Brantley had previously indicated that part of the renegotiations would see consumers on Nevis paying less for the renewable energy when it comes on stream compared to under the pre-existing arrangement.