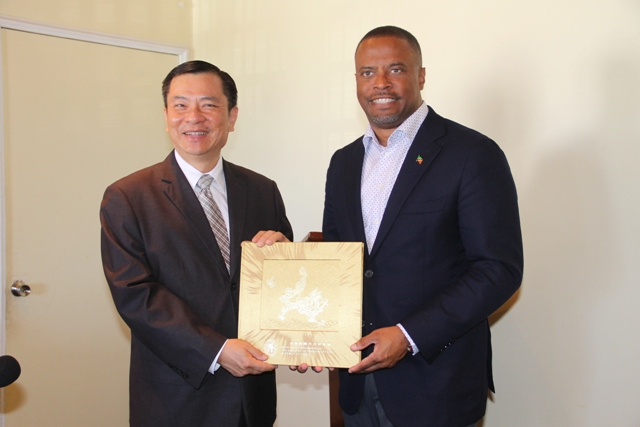 (l-r) His Excellency Mr. George Gow-Wei Chiou Resident, Ambassador to St. Kitts and Nevis for the Republic of China (Taiwan) presents the manual for the newly-installed Health Information System at the Alexandra Hospital on December 08, 2017

He made the comment while delivering remarks at a ceremony to mark the handing over of the Health Information System, room a gift from the government and people of the Republic of China (Taiwan), on December 08, 2017, at the Alexandra Hospital conference. He noted that the equipment is a significant move in that direction.

“Data to inform government action, recognising and understanding that if we have our data suggesting that here is a problem here, then that problem might attract more resources in the context of the budgeting process for government. For too long we have engaged in guess work. We have engaged in efforts that are well-intentioned but not necessarily driven by the data…

“I feel that as we move forward in Nevis, we ought to be moving in the direction where we use the available technology we have. Data drive our decision making and I believe this is a quantum leap forward for Nevis and, of course, the wider Federation of St. Kitts and Nevis,” he said.

Mr. Brantley, said the implementation of the Hospital Information System is intended to move the Alexandra Hospital from the current manual paper system to a digitalised world.

He said he had already been issued with a medical card from the hospital which gives easy access to medical records through the digitalised system.

Meantime, the Health Minister used the opportunity to thank the government and people of Taiwan, through their resident Ambassador to St. Kitts and Nevis His Excellency Mr. George Gow-Wei Chiou, for the digitalised information system and their continued assistance to Nevis.

“I believe that the training is going to continue and that our medical personnel will be better off and our hospital and our health centres will ultimately be better equipped to serve all of our people,” he said.

In his remarks the Ambassador explained that the Hospital Information System project spanned from 2014 to 2017. It is the first cooperative project combined with public health and information and communication technology between St. Kitts and Nevis and the Republic of China (Taiwan).

He said the purpose of the project is to establish digitalised medical records storage at the hospital in Nevis and the Joseph N. France (JNF) General Hospital in St. Kitts.

“Over the years, this project had designed the digitalised software and introduced this software to departments of the Accident and Emergency, doctor consultation, nurse, pharmacy and wards at the Alexandra Hospital.

“This year, a reading device has been added to this system which provides convenient access to index and track patient’s medical history. The inputs of medical charts and doctor’s notes from the surgery or consultation can be easily digitally added through this system platform,” he said.

The Ambassador added that another important implementation to the system is the adoption for a tablet-to-ward area in which nurses on the wards would be able to enter patient’s medical information such as temperature, blood pressure or vital signs directly into the hospital information system.

He said that method would ensure quicker and comprehensive processing of the patient’s medical data.

Under the project, training has been provided in 14 different subject capacity building seminars and workshops for hospital medical professionals in St. Kitts and Nevis.