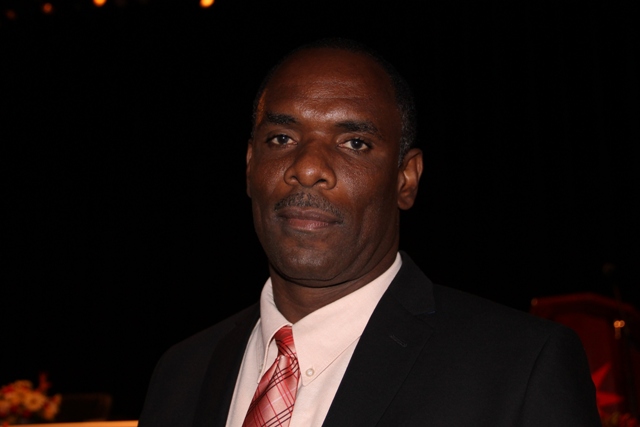 NIA CHARLESTOWN NEVIS (DECEMBER 28, 2015) — The Nevis Island Administration (NIA) is well on its way to moving into an e-commerce stage. The disclosure came from Permanent Secretary in the Ministry of Finance Colin Dore when he delivered remarks at the recent IT Delta Awards Ceremony held at the Nisbet Plantation Inn on December 19, 2016.

He commended the staff at the Information Technology (IT) Department for their innovation and the ability to go beyond the call of duty to achieve the goal of Nevis becoming an e-commerce society within the next two years.

“They have gone well beyond the call of duty to be innovative when necessary, to ensure that in Nevis we are moving to an e-commerce stage in a very short time and I dare say, that within two years we will get to the stage where we are in a paperless society and we are really working hard towards achieving this.

“That’s one of the goals I’ve set for the department and I believe right now we are about 75 percent there and we are getting there at a rapid pace, far exceeding our expectation,” he said.

Dore explained, that although there has been great progress in a number of areas regarding information technology development by the department, the most noticeable is the development of the Administration’s fibre optic capability.

He said over the past two years the department had spent tremendous time and effort in rolling out its fibre optic programme which has propelled the NIA forward in a number of areas.

Dore noted that as a result of the programme, the administration has been able to deploy Closed Circuit Cameras in Charlestown as an effective tool in helping the police in law enforcement. However, one of the critical areas that has been developed in recent times is the administration’s telephone system.

He said they are now using the Voice over Internet Protocol (VoIP) communication system for all of the telephone handsets, which has resulted in considerable savings for the NIA in terms of its telephone bill.

According to Dore, the IT Department has also been able to computerise a number of accounting systems in the various departments.
“We have Automated System for Customs Data (ASYCUDA) at the Customs Department, the Sigtas application at Inland Revenue for revenue collection and the Fitrix application for processing payroll at the Treasury Department.

The Permanent Secretary also stated, that as a result of the advances made in information technology by the administration, it has also been able to assist the public. He said they had arrived at the stage where companies can file their annual returns online and also make payments online.

Mr. Dore said, it is no secret that the development of IT capability sets one country apart from the next because it enables it to deliver on the critical services for government in a timely and efficient manner.

He referred to St. Kitts and Nevis’ low ranking in the Ease of Doing Business index created by the World Bank. However, he expressed hope that the development of the islands’ IT capability will take them to a level that could improve their status in the ranking.