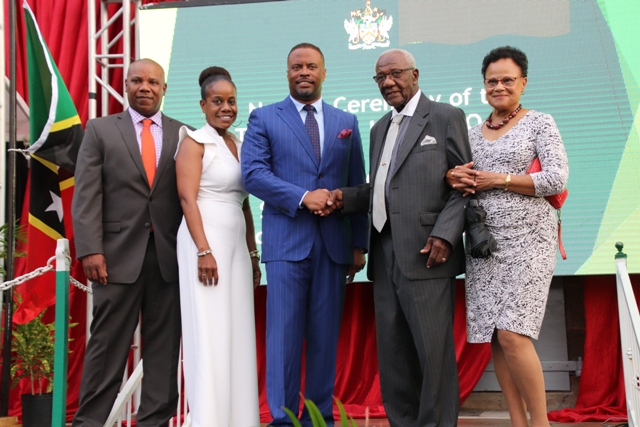 Mr. Theodore Hobson Q.C. and his family with Hon. Mark Brantley, Premier of Nevis standing in front of the newly named Theodore L. Hobson Court Building in Charlestown on April 28, 2019

On April 28, 2019, after the official unveiling of the Theodore L. Hobson Court Building by Deputy Governor General Her Honour Hyleeta Liburd, and blessing of the building by Father Piotr Palowski, Parish Priest for the St. Theresa Roman Catholic Church in Charlestown, Mr. Hobson said he is humbled to have his name associated with such a building.

“Let me first of all, record my sincere thanks to the Honourable Premier and his Cabinet for promoting and championing the idea of naming this Court Building in my honour…

“It is my view that in any democratic country, the Court is the most important institution. It is the symbol of liberty and the commitment to the rule of law.  To be associated in this way to the Nevis High Court is truly awesome but at the same time humbling,” he said.

Mr. Hobson noted that since he was admitted to the Bar almost 56 years ago, the commitment to the rule of law has grown by the increase of legal practitioners, and the expansion of the Administration of Justice in St. Kitts and Nevis and the Organisation of Eastern Caribbean States (OECS).

The senior attorney said when he was admitted to practice on November 12, 1963, there were only 12 lawyers in the Federation – nine in St. Kitts and three in Nevis. However, today there are over 140 lawyers practicing in St. Kitts and Nevis, of which 40 live in Nevis and practise in the High Court in Charlestown.

Regarding the judicial expansion, he explained that the introduction of the Eastern Caribbean Supreme Court Civil Procedure Rules 2000, as amended with its emphasis on transparency and accountability particularly in the area of Administrative Law, through the Procedure of Judicial Review, public officials and public bodies are made to account for their acts and decisions.

Mr. Hobson believes that the change is for the public good, and demonstrates the principal that no one is above the law, which is the foundation of the rule of law.

Reflecting on his long career, the senior attorney expressed satisfaction with his contribution to the legal profession and to the administration of justice.

“As I prepare to exist from the practice I have loved and enjoyed, I feel certain that the Rule of Law is safely grounded in our nation, and that this court building would continue to be a beacon to those who seek justice.

“Whatever service I may have rendered to the profession and the Administration of Justice, I did it out of a feeling of devotion to my country and that I will continue to offer,” he said.

Mr. Hobson used the opportunity to thank his wife of 47 years, Dr. Daphne Hobson, their children Cabral, Farida and Justin, and his personal secretary of 32 years Mrs. Charmaine Hanley.

The name of the courthouse was changed with permission from the Federal Authority and the blessings of the Hon. Dame Janice Pereira, Chief Justice of the Eastern Caribbean Supreme Court.

Other remarks at the ceremony came from Hon. Mark Brantley, Premier of Nevis and Mrs. Dahlia Joseph-Rowe, President of the St. Kitts and Nevis Bar Association. Mr. Charles Wilkin, C.M.G., Q. C. delivered the Feature Address.The Invocation was done by Reverend Eric Maynard, and the Vote of Thanks by Ms. Rhonda Nisbett-Browne. Mr. Brian Barnes served as Master of Ceremonies.

Among those present were Governor General of St. Kitts and Nevis His Excellency Sir Tapley Seaton and members of the NIA Cabinet.