Premier of Nevis Hon. Vance Amory
NIA CHARLESTOWN NEVIS (January 20, 2014) — Premier of Nevis Hon. Vance Amory said he was hopeful that the Federal Government would heed the call of the Nevis Island Administration (NIA) for outside assistance with the investigation of the cause of the early morning fire on January 17, 2014, which gutted the Treasury Building in Charlestown and cited it would lay to rest any speculation.
Mr. Amory’s comment came in an interview with the Department of Information on January 20, 2014, after he led a delegation of Cabinet colleagues on a tour of the Nevis Corporative Credit Union’s Ingle Blackett Building Business Complex for relocation of the displaced offices. 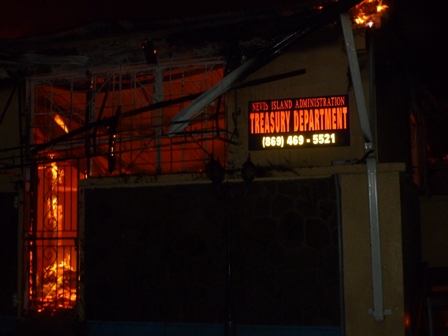 “I can also say that in respect of our own position with the destroyed Treasury Building, which clearly has disrupted the operations of government; has disrupted the lives of people in Nevis, that we are seeking outside assistance through the Prime Minister to engage in the investigation to determine the cause of the fire and to put to rest any speculation as to what it was….
“We need to have some expert investigation to assure us of the cause so that we can lay to rest any speculation and it is my hope, that we will have that request honoured to have assistance to do the investigation and to have that as quickly as possible,” he said.
The Premier stated, that the fire, was one of the most disruptive events in Nevis, which was not storm-related, since it not only destroyed a substantial building, the equipment there and almost 100 percent of its paper records. 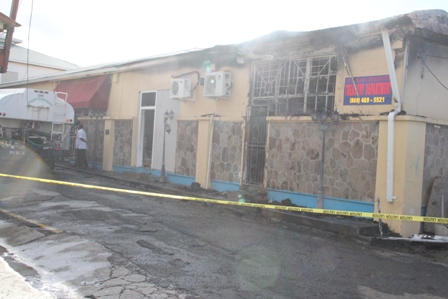 “It is not just the government’s operations that have been affected but surely we have the persons who do business with government, persons from oversees; persons who visit. It is really a very distressing time for us but I am confident, that we shall have the cause determined and as well we shall see something rising out of the ashes of that building within short order because we are going to do all that we can to get assistance and to use whatever resources we have, to get our operations up and running once more,” he said.
In conclusion, Mr. Amory asked for the patience of the public on Nevis and asked them to recognise that the Administration was doing and would do all it could to ensure the provision of services  as soon as possible.