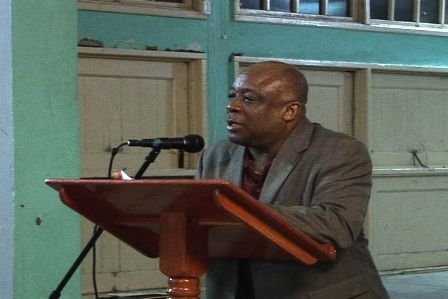 CHARLESTOWN NEVIS (December 03, 2010) — Minister of Social Development on Nevis Hon Hensley Daniel told six graduands of a three month course in Principles of Landscape Design, that the training they received formed part of an ongoing process to develop the skills bank on Nevis.

Mr. Daniel made the comment recently at an informal graduation ceremony at the Gingerland Secondary School’s auditorium. He said the opportunity to transfer skills to young people who would use them for personal, professional and economic development for their own financial benefit was what mattered most to the Joseph Parry-led Nevis Island Administration (NIA).

He said so far courses had been conducted in basic electrical wiring in the villages of Brown Pasture, Charlestown, Cotton Ground and Newcastle for young persons at risk. During the training, they were provided with the requisite skills for the job market to become meaningful and productive citizens.

The Minister disclosed that training in other areas would continue with a course in Blueprint Reading and Plumbing earmarked for early 2011. 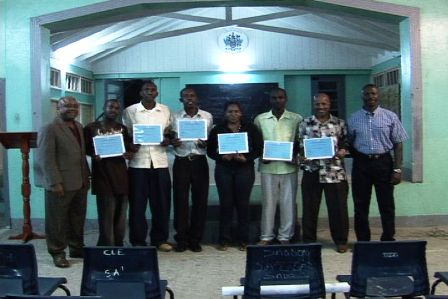 “We are going to do some basic plumbing courses. I have already engaged the plumbing instructor and we have the Blueprint Reading people. We simply have to organise these right across the island. This is under the programme we have Empowering Men for Change,” he said.

The Social Development Minister also pointed to other programmes offered to youths by his Ministry.

“We have a programme in the Ministry of Community Development called HYPE (Helping Youth Prepare for Employment). We send young men and women off to Trinidad for three months to do auto mechanics, plumbing, electrical, carpentry, masonry, welding.

“We have done that twice over the last two and a half years. Thirty five young people with new skills and all we are seeking to do, is what used to be done in the developed world. In America and England right after World War II they sought to re skill the young men,” he said.

According to the Minister, both the American and British societies had sent their 16 and 17year olds to schools as apprentices to learn trades in response to the whole idea of industrial and economic development. 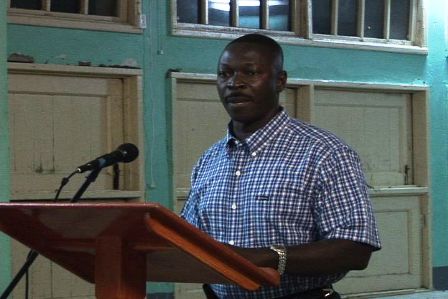 Mr. Daniel told the participants of the landscaping course their training would find place in the forward movement of Nevis and pointed to the planned construction of an Amman Hotel on the island in 2011.

He explained that the Nevis Island Administration had embarked on the training programmes as a means to reduce anti social behaviour and crime in the community.

“By giving young people skills there is no reason for them to rob and steal and make people uncomfortable in this very peaceful country. So these are but another arm of our prevention programmes. Our crime prevention programmes are anchored on these kinds of skills training programmes,” he said.

Meantime, in an overview of the course, Instructor Mr. Dane Sandiford said a number of principles of landscape design particularly plants, plant selection, trees, shrubs and ground covering were involved. They were all part of understanding landscaping and design concept.

“The students were given the opportunity to design four properties. At the end of each design, they were graded by means of presentation of the design which means that they had to explain, outline and pretty much sell the landscape to me.

“The course was very involved and it required the students to be very detailed for every square foot of the property. It allowed them to be creative, imaginative and to do a lot of research as far as plant material is concerned, the growth and spread of plants and things like that,” he said.

Mr. Sandiford said the course provided the participants with a very real programme and at the end they walked away with the understanding of all the fundamentals and basic ideals and principals of land design.

He used the opportunity to register his confidence in the participant’s achievements and noted that they all had the capacity to design around any residential or commercial property and be successful at it.