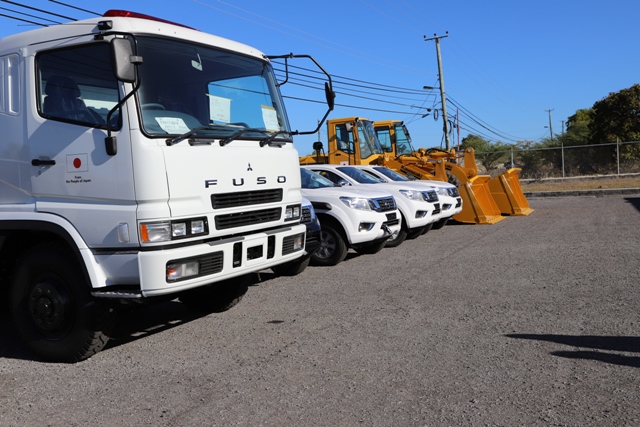 Seven vehicles at the Nevis Disaster Management Department’s parking lot at Long Point, part of a multi-million dollar gift from the Government and people of Japan to the Nevis Island Administration

NIA CHARLESTOWN NEVIS (February 20, 2019) — The Nevis Island Administration (NIA) through the Nevis Disaster Management Department (NDMD) is on the receiving end of a multi-million dollar gift from the government and people of Japan to assist with disaster management.

The disclosure was made at the grounds of the NDMD on February 20, 2019 when the NIA Cabinet inspected some of the equipment received. Premier of Nevis Hon. Mark Brantley thanked the donors for the gift.

“It is for me as Premier of Nevis to thank the government and people of Japan for this very generous donation, for this very generous investment that they have made in the development of our island, and I think that all of us should be proud this morning, all of us should be happy this morning that we are seeing the fruits of that continued engagement with important countries such as Japan, in terms of what they have offered,” he said.

The gift which is being delivered in tiers includes two front-end loaders, three disaster management mini storage units, rescue equipment, one drone, two SLR cameras, one dump truck and a pallet of spare parts, one rescue vehicle with snorkel and three pick-up trucks.

Mr. Brantley believes that the gift would put Nevis in a better state of readiness to face disasters.

The Premier stated that the donation came as a direct result of engaging the government and people of Japan for the assistance in the development of Nevis.

“What you see here is a realization of those efforts in terms of engaging with foreign governments, seeking to build our country, build our little island here in Nevis and to get from those relationships things that are beneficial for us and our people,” he said.

Meantime, Mr. Brian Dyer, Director of the NDMD, explained how the gift would be utilized noting that the front-end loaders would be used for clearing roads in the event of an emergency and to assist with beach nourishment in the event of erosion after severe wave action.

will be storing emergency supplies so the volunteers in the various communities can act responsibly in the immediate aftermath of any emergency or crisis for a period of up to two days before the professional help arrives,” he said.

Among the equipment in the warehouses are rescue ropes, backboards, wheelchairs, faucet kits, reflective vests and chain saws etc. for use in emergencies.

Regarding the equipment which is expected later this year he explained that the medical vehicle is for use by the Ministry of Health. The generators would be placed at the community centres when they are operating in emergencies.

The CCTv will be used at the NDMD compound. The VHF radios will be installed at community centres and in all the vehicles in the gift package.

Japan is expected to send a team of technical experts to assist in training in the use of some of the equipment.