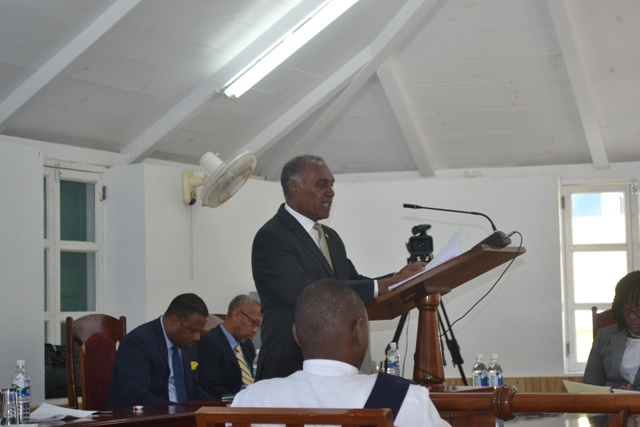 NIA CHARLESTOWN NEVIS (DECEMBER 09, 2015) — The issue of crime and the eradication of criminal activity continues to be high on the agenda of the Nevis Island Administration (NIA). The assurance came from Premier of Nevis and Minister of Finance Hon. Vance Amory when he delivered the Budget Address at a sitting of the Nevis Island Assembly on December 08, 2015.

Mr. Amory who I also responsible for security on Nevis, said the Administration stands committed to the fight against crime because it believes that the safety and security of the people of Nevis is its utmost responsibility.

He pointed to the steps the Administration had already taken to curb crime including the purchase of two-cargo baggage x-ray machines which cost in excess of US$100,000. They were installed at both the Long Point Port Warehouse and the Customs Baggage Area at the Vance W. Amory International Airport.

Mr. Amory also stated that the NIA granted financial assistance to the Nevis Air and Sea Ports Authority towards the purchase of a petrol vessel valued at US$165,000.

He expressed hope that the new measures would have a serious effect in tightening the control at the island’s boarders.

The Premier said the Administration cannot effectively develop as a country unless peace and stability is maintained and criminal activity in the communities on Nevis is reduced to a zero level.

However, he said in order to achieve this the Administration has granted approval for members of the St. Kitts and Nevis Defence Force to be present on Nevis on a regular basis working alongside members of the Royal St. Christopher and Nevis Police Force, Nevis Division.

The Premier said the NIA has allocated to date $200,000 towards the procurement of equipment and other services for members of the Police Force stationed in Nevis. He thanked the public and business entities who continue to donate to the Police Force.

Mr. Amory also explained that the Administration remained committed to the use of Closed Circuit Television (CCTV) technology as a means of assisting the police to deal with the issue of crime.

The Minister responsible for security on Nevis, also stated that the NIA still plans to pursue the development of Automatic License Plate Recognition technology in conjunction with the use of retro-reflective licence plates.

He said a number of locations across the road network in Nevis have already been identified where the technology could be used. A pilot run of the system is planned for early 2016 with full deployment to follow shortly after.

The Premier explained that in the meantime, ongoing work will continue to upgrade the video management hardware and software to allow for consolidation of all existing and future cameras on a single platform. They will serve to improve the ability of the police to conduct investigations through footage and forensic image analysis.

Regarding an initiative involving the private sector, Mr. Amory said the Administration would continue to work to improve the partnership with the sector through the Secure Nevis initiative. The initiative would seek to assist the business community in its own deployment of CCTV technology.

Mr. Premier noted that the NIA also plans to set up an advisory committee on Violent Crime that would guide the implementation of strategies to enhance other crime fighting initiatives in St. Kitts and Nevis.

The Administration also plans to acquire tree additional surveillance K-9 to assist Police in the detection of illegal substances and firearms.