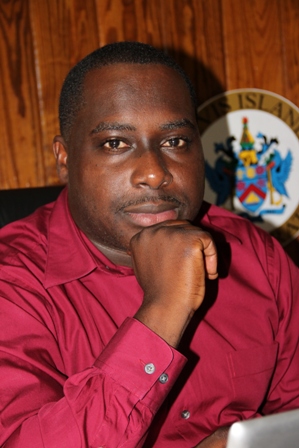 Press Secretary to the Premier of Nevis and the Nevis Island Administration Mr. Mervin Hanley
NIA CHARLESTOWN NEVIS (November 05, 2013) — The Nevis Island Administration (NIA), led by Premier of Nevis Hon. Vance Amory, will host a town hall meeting at the Red Cross Conference room from 7 p.m. on November 07, 2013.
Press Secretary to the Premier of Nevis and the NIA Mr. Mervin Hanley, made the announcement when he spoke to the Department of Information on November 05, 2013 and extended an invitation to the public to attend.
“The town hall meeting that is planned this week will be on Thursday evening at the Red Cross building and we are expecting that all Nevisians will come out and hear from your Premier and his Ministers as they give you an update of what’s happening in and around Nevis and what will happen. It also gives Nevisians a chance to come out and interact with the Ministers,” he said.
Mr. Hanley stated that the town hall meeting was in keeping with the Concerned Citizens Movement’s (CCM) campaign promise to remain transparent.
“During the first year of this Administration or even on the campaign trail, this new Administration promised the people of Nevis that we will report to them on different matters, at different times. As you have realised, the Premier has had a few press briefings.
“On the campaign trail, we promised the people of Nevis that we will report to them accordingly and this is what we are doing. He [Premier Amory] has had press briefings; he has addressed the nation via radio and television and this is now an opportunity for all Ministers.  We just find it fitting that at the end of the year, that all Ministers come together and give a report of their portfolios and their Ministries and a chance to interact with the Nevisian public,” Mr. Hanley explained.
The meeting is the first since the Administration took office late January 2013.