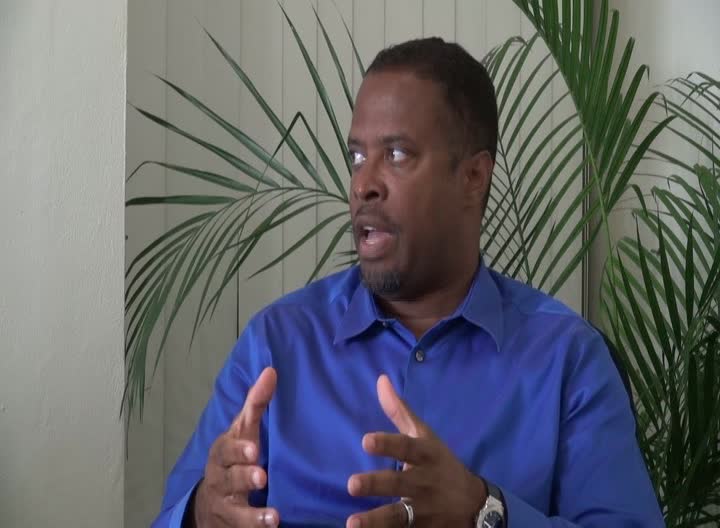 Deputy Premier and Minister of Health in the Nevis Island Administration Hon. Mark Brantley as a guest on Nevis Television's Inside Government
NIA CHARLESTOWN NEVIS (April 09, 2014) — Deputy Premier of Nevis and Minister of Health Hon. Mark Brantley shed light on advances being made toward the formation of a dialysis treatment centre as part of a new diagnostic wing at the Alexandra Hospital.
The Minister who was at the time a guest on Nevis Television’s Inside Government programme on April, 07, 2014, explained the advance was one of several systematic strides happening in the island’s health care sector.
“We have been searching desperately for a partner in terms of dialysis. We now have, we feel, a reliable partner that we have been working with…It has taken time because these things can’t happen overnight and that is what I have always said… We had to constantly go and revisit how we can go about it. Finally we have found a partner. They have offered us additional machinery, additional supplies at a rate that we feel is workable and they have offered us some training.
“So we are looking now to actively go in that direction. We have done the identification process of the nursing staff [and] the technical staff who we will send away for that training. That is being worked out now. I will, of course, have an update when we have concrete information in terms of timing and when we are going to look at it,” he said.
According to Mr. Brantley, the necessary trained support staff for the delivery of care to renal failure patients was a critical first step which had not been undertaken in the past.
“Dialysis is not something that you can stop and start. It is something where once you say to people you have the service, then you have to be able to stand behind it and with no preparation, nothing done it then came to us [sitting Administration] to put a plan in place,” he said.
However, the Health Minister explained that based on expert advice, the machines used for kidney dialysis also had to be adequate before the service could be offered to the public.
“One of the problems that we have encountered is that the expert advice we have taken has said that two machines is inadequate to provide dialysis. Why is that?…You always have to have a machine that is standing by so that if anything goes wrong, you can switch the patient over and then you always have to have separate machines for people who may have infectious diseases.
“So people who may have HIV, people who may have hepatitis and like infectious diseases, they cannot go on the same machines as those who are simply suffering from ordinary renal failure…or those who don’t have infectious diseases. Now we are being told that we need a minimum of four in order to have a proper dialysis centre,” he said.
According to Mr. Brantley, armed with that advice the Administration began an active international search for assistance that would fit the needs of the Health Services on Nevis.
“We have been scoring the world…I want to say to the public that it has been at least a weekly engagement. We have engaged with people…We have had conversations with dialysis centres in America. The first question they ask: ‘How many patients do you have?’ When they are told two or three, they are not interested because, for them, they recognize as we say colloquially ‘The dance can’t pay for the lights,” he said.
Regarding the containerised unit that had been purchased under the former Administration for renal failure treatment, Mr. Brantley explained why it was inadequate.
“The dialysis machine came in a little container and we are also told that that really is inadequate for the purposes of a proper dialysis centre. We feel that the people of Nevis, if they are going to go down that road, ought to have a proper centre and so we have now included [it] in our architectural drawings for our new diagnostic wing and area, that we hope to allocate to a proper dialysis centre.
“The plans are being finalised for that. The Premier would have spoken to it during his Budget Address where we are building a brand new lab. We are building a brand new diagnostic centre at the grounds of the Alexandra Hospital.  Very shortly, in a week or two, we will be clearing a lot of abandoned buildings in the back. We will be clearing all those to make way for what we hope to be the first substantial addition to the hospital in a very long time,” he said. 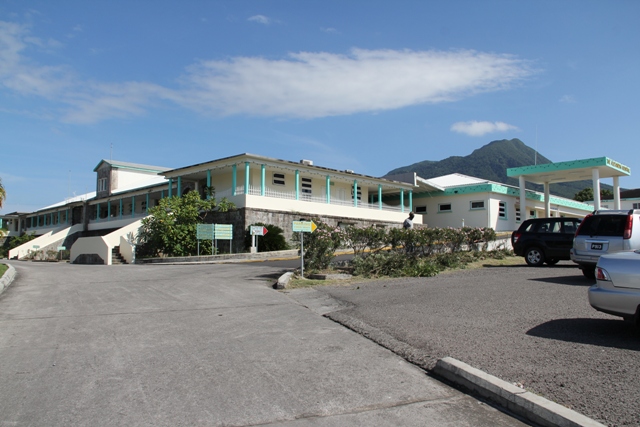 Also included in the plans for the diagnostic centre, Mr. Brantley stated, will be a facility for the treatment of cancer patients.
“We hope now to have radiation therapy. We are very close to concluding that, for cancer treatment. Clearly we already have chemotherapy. That’s available through a private partner [and] we now hope to have radiation therapy at the Alexandra Hospital.
“So things are happening. Strides are being made but I want people to understand that in healthcare it takes time,” he said.