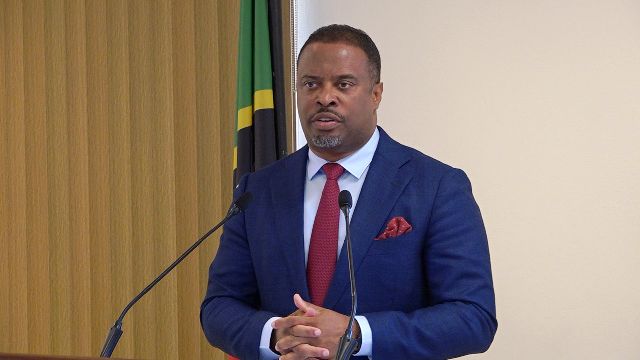 Hon. Mark Brantley, Premier of Nevis and Minister of Finance in the Nevis Island Administration, at his monthly press conference at Pinney’s Estate on February 27, 2020

NIA CHARLESTOWN NEVIS (February 27, 2020) — The Nevis Island Administration (NIA) is seeking to provide benefit packages to non-established (NE) workers at the end of their tenure with the government, a feat that has not been done in the past.

Hon. Mark Brantley, Premier of Nevis and Minister of Finance, in the NIA spoke of the planned reparation at his monthly press conference at Pinney’s Estate on February 27, 2020. He said legislation had been proposed at the federal level, and the NIA is seeking to put together a policy to deal with the matter.

“We know that there are people in the system who have worked 40-50 years sometimes and they have no security because when they came into the system, for one reason or the other may not have had the necessary qualifications that the Public Service requires in order for them to be appointed.

“Many of them have worked long…and they have given tremendous service but whereas when the Public Servants and Civil Servants leave they have pensions…when the non-established workers or the auxiliary workers leave they don’t have any such arrangement. Well, we are seeking to fix that…

“A draft policy should be coming soon, and so I make bold to say that our NE workers who I know have, as they come closer to retirement, some level of concern and anxiety, that we are aware and will seek to do what we can to assist and to give them a bit more comfort in their later years as they retire,” he said.

The Premier announced that the NIA has since put a committee in place which is mandated to come up with the draft policy for the compensation packages, and spoke of its composition.

Meantime, Mr. Brantley had some advice for non-established workers who are in the government system at present, urging them to upgrade their skills to pave the way for their appointment.

“To be appointed there are some requirements. Have you satisfied the requirements? …Get the subjects that are required and that is my recommendation because that is what the system requires. Those are the rules…

“Being appointed is not a favour. It is not because you support a party. It is not because you are somebody’s friend. Being appointed flows from having the requisite qualifications to be appointed, and so for those who are in the system now who are not yet appointed, and who want to be appointed I’d encourage them to do what they need to do, to check with their supervisor; check with Human Resources; find out what the requirements are and to proceed accordingly,” he said.