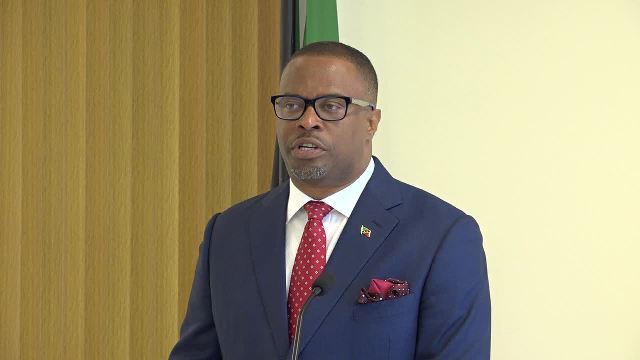 NIA CHARLESTOWN NEVIS (May 09, 2018) — The Ministry of Human Resources has a new Permanent Secretary in the person of Mr. Edson Elliott.

The announcement was made at the third press briefing by Premier Hon. Mark Brantley on April 30, 2018 at the Nevis Island Administration (NIA) Cabinet Room at the Social Security Building at Pinney’s Estate.

Mr. Elliott assumed the role on May 01, 2018, upon the retirement of Ms. Ornette Herbert.

“Mr. Edson Elliott, as we all know, was hitherto at the Charlestown Secondary School for a very long time, had a very, very good run there, a very successful run. He has spent quite a significant amount of time managing people and we thought that, when we looked across the landscape, that he was the best person to fill this particular position.

“I’m pleased to announce that the Public Service Commission has accepted his appointment and that he should take up the role as of May 1st, so congratulations Mr. Elliott,” Premier Brantley said.

Prior to taking up this position, Mr. Elliott served as Education Officer with responsibility for Secondary Schools. He also taught at the Charlestown Secondary School for a number of years before serving as principal for 13 years, the longest-serving head of the institution.

Premier Brantley also expressed his appreciation to Ms. Herbert for her tenure in the civil service.

“Ms. Ornette Herbert is headed into a well-deserved retirement. She has been working long and hard for a very long time and she has decided to retire. I want to publicly thank Ms. Herbert for her service over the years.

“She has really, in my view, tried extremely hard to inject professionalism into the service. She is a stickler for the rules…We commend, again, Ms. Herbert for her tremendous service to the people of Nevis and to the Nevis Island Administration and wish her well as she now transitions into a different phase of her life,” Premier Brantley said.