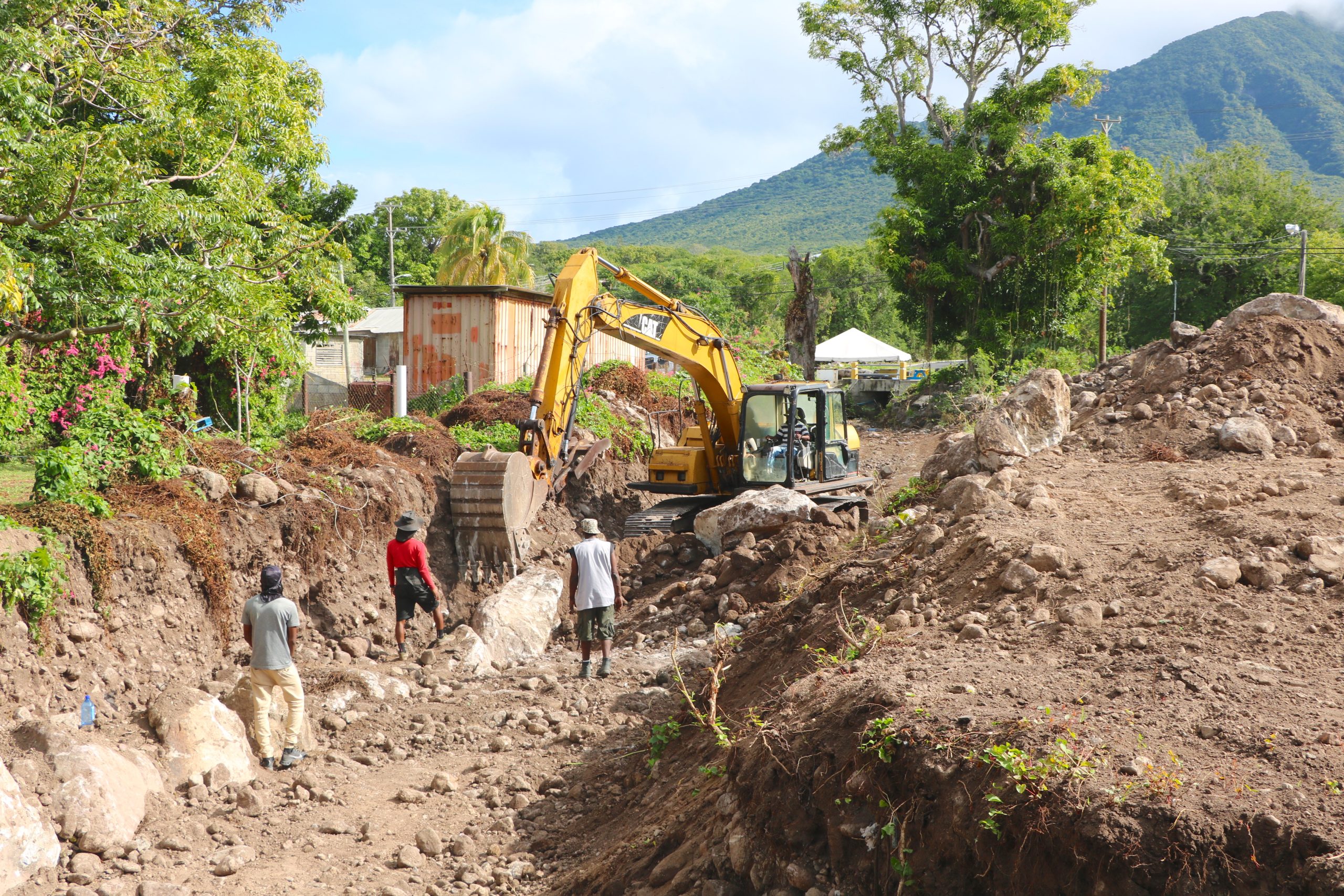 Ministry of Public Works and Communications in the Nevis Island Administration revetment work in the Stoney Grove ghaut (January 24, 2022)

NIA CHARLESTOWN NEVIS (January 25, 2022) – The Ministry of Public Works and Communications in the Nevis Island Administration (NIA) is continuing a revetment project in the Stoney Grove ghaut that will provide a level of safety for residents in the flood-prone area.

Hon. Spencer Brand, Minister of Public Works and Communications, and area representative for St. Pauls’, visited the site on Monday, January 24, 2022 and gave an update on the project. He said flooding has been a longstanding issue in that area, and he is grateful that the government is able to provide relief for residents who have been and are likely to be affected.

“I am delighted with the progress of the work we are seeing here in the ghaut of Stoney Grove. Phase two of the project started in November 2021. As a former resident of Stoney Grove I am fully aware of the issues and challenges that the residents would have faced over the years with flooding and so I felt it was necessary to see the completion of this project.

“It is particularly satisfying to see we are at the stage where we can bring some relief to the inhabitants along the ghaut and other residents in this area…having lived just a stone’s throw from this ghaut. I would wish to thank Mr. Dale “DC” Claxton; he has been doing a remarkable job,” he said.

Mr. Claxton, owner of DC Equipment Construction, is spearheading the project. He spoke to the revetment process being carried out, noting that some work on the ghaut side had been undertaken several years before.

“We are lining the edge of the ghaut with some boulders and shortly we will be reaching up to the bridge next to the Water Department. The overall length, both first and second phase, is about 700 feet. Both phases consisted of shoring up the side where persons live. The other side [of the ghaut] next to Pennyless Auto Parts is just pasture, so for now we are focusing on protecting the safety of villagers.”

Mr. Brian Dyer, Director at the Nevis Disaster Management Department, said Stoney Grove is a flood-prone area and in November of 2011 severe flooding had impacted residents. He said as a resident of the area and from a Disaster standpoint, he too is pleased to see the area getting protection from the elements of flooding.

“In 2011 all the bridges here and in lower Bath Village got overtopped by water and over 27 families in the area were impacted by the flooding. Since then the government has sought to do some remedial work to mitigate the impact of flooding and flood damage not only to the area but also downstream in lower Bath.

“We have seen some revetment work in stages. Back in 2017, with funding from the Japan Embassy, we did some construction work in the lower end where we shored up some premises and also did some paving work in the ghaut and some rock revetment around the business sector in lower Stoney Grove.”

Mr. Dyer explained that further work will be done to put in an access ‘bridge’ in that area.

“We are also continuing with the construction of a roadway or bridge between the Girls Guides and Warde’s building to provide us with an advantage in the event we have flooding that there’s another option for access to the hospital, because back in 2011 when all the bridges were overtopped, access from the south side of Nevis to Alexandra Hospital was cut off. So we are doing some work to ensure that problem doesn’t occur again. We want to say thank you to the Nevis Island Administration for its foresight in addressing the issue,” he said.

The revetment project is slated for completion well ahead of the start of the 2022 Atlantic Hurricane Season.