Some of the local chefs participating in the Nevis Tourism Authority’s third annual Nevis Mango and Food Festival (l-r) Silvester Wallace, Michael Henville, Llewellyn Clarke, Berecia Stapleton, Renaldo Mills and Paulette Frederick during the media launch at the Montpelier Plantation and Beach on June 09, 2016
NIA CHARLESTOWN NEVIS (June 14, 2016) — The Nevis Tourism Authority (NTA) launched its third edition of the Nevis Mango and Food Festival at the Montpelier Plantation and Beach on June 09, 2016. This year, nine local chefs will join two international celebrity chefs for the July 08 -10 mango extravaganza.
Chefs Renaldo Mills, Cleo Hanley, Llewelyn Clarke, Franklyn “Cut” Daniel, Michael Henville, Paulette Frederick, Berecia Stapleton, Iyana Dore and Silvester Wallace will join self-taught Natasha Corrett of Honestly Healthy fame in London and Iron Chef Judy Joo, a Korean-American French-trained chef based in London.
In remarks at the media launch, the authority’s Chief Executive Officer Greg Phillip, said the festival brings with it the opportunity to celebrate the mango which is grown in abundance on Nevis and to highlight the island’s culinary scene.
“We have an absolute culinary scene on the island of Nevis and because of that, when we [NTA] considered what we can do, we said three years ago that this is the best thing to have – a mango and food festival.
“It’s a mango and food festival, yes. We can look around the Caribbean and recognise there are other mango festivals. There are other food festivals. The reason for that is because they are a really, really important part of tourism in the Caribbean – the food. What we do on Nevis with our food festival is, by combining it with mangoes, we make it something that is truly special,” he said.
Phillip also underscored the opportunities the festival offers the local participating chefs. He said it was impossible to promote Nevis and its culinary scene without embracing the chefs on Nevis who live on the island and who contribute every day to make the Nevis tourism industry what it is.
According to the NTA Official, the local chefs will be able to interact with the visiting chefs, who agreed to impart some of their knowledge and show and give them tips on how to be better at doing food demonstrations.
“We want that because it gives you an opportunity to grow here in the industry to make you even more of a resource to the industry here on Nevis and we are giving you that opportunity. So we are quite pleased that they have agreed to do such a thing,” he said. 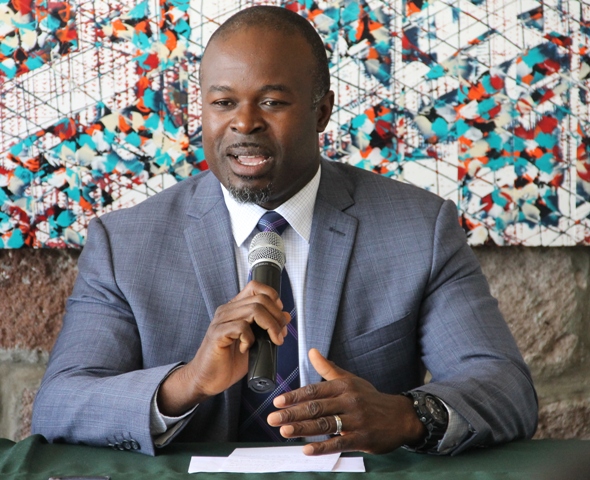 Phillip also noted that the local chefs will be highlighted at the Nevisian Mango Chefs Fair slated for Oualie Beach on the festival’s last day.
He said the event will offer members of the public the opportunity to see the local chefs and sample their culinary creations. In turn, the chefs will be able to promote their work through the food they prepare and to showcase the skills they learnt in the area of food demonstrations through their interaction with the visiting celebrity chefs.
The NTA official also used the opportunity to thank the local chefs for their participation in the festival.