(L-R) Spencer Hanley presents a plaque of appreciation on behalf of the Nevis Association of South Florida, to General Manager of the Nisbet Plantation Inn in the presence of the hotel’s managers

Mr. Holmes, who was accompanied by managers of the hotel’s various departments, was presented with an appreciation plaque by Mr. Spencer Hanley on behalf of the Association.

During the presentation, Mr. Hanley explained that earlier this year the hotel had contributed a three-night and four day stay for the winner of a raffle held during the Anguilla-Nevis-St. Kitts Association Reunion function on June 19, 2010 in Miami. At that event, Nevisian Mr. Spencer Howell was honoured.

“The Nevis Association of South Florida also wants to congratulate Nisbet Plantation Inn for being named the number one resort in the Caribbean and number six in the world for 2010 by Travel and Leisure Magazine,” he said. 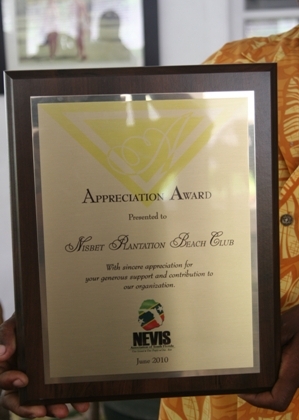 According to Mr. Hanley, the Association is a non profit organisation that assisted Nevisians at home and abroad. He also noted that in 2009, the Nevis Association of South Florida contributed US$1,000 to the Charlestown Secondary School Scholarship Fund.

He used the opportunity to remind the public of the Association’s annual Christmas Dinner planned for December 18th 2010. Mr. Hanley urged organisations willing to sponsor a raffle for that event to contact him. He said he would be pleased to connect interested persons with the club’s president Mr. Clinton Weekes.