Hon. Hazel Brandy-Williams, Junior Minister in the Ministry of Social Development on Nevis at the Sub-Regional Women’s Forum on the SDGs hosted by the Ministry of Social Development in the Nevis Island Administration in collaboration with the Commonwealth Women Parliamentarians and supported by the Organisation of American States at the Mount Nevis Hotel on March 22, 2017
NIA CHARLESTOWN NEVIS (MARCH 22, 2017) — Junior Minister in the Ministry of Social Development Hon. Hazel Brandy-Williams, described participation in the first ever sub-regional conference for women and girls hosted by the ministry as overwhelming.
The two-day meeting, which commenced at the Mount Nevis Hotel on March 22, 2017, brought together participants from across the Caribbean and St. Kitts and Nevis. An initiative of Hon. Brandy-Williams, the meeting is designed to underscore the Nevis Island Administration’s (NIA) commitment to women’s empowerment, within the context of the Sustainable Development Goals (SDGs).
“At the last minute we had to turn down the requests of some persons who wanted to come. The capacity of the room here at Mount Nevis is 75 and I think we have surpassed that capacity a little,” she said.
The Minister believes that the cross section of participants is a perfect mix of youth, experience, professionals and persons from civil society. She expressed hope, that the ministry would be able to garner information and varying ideas from the cadre of persons in attendance.
Hon. Brandy-Williams said the forum was able to draw participants from six of nine Organisation of East Caribbean States (OECS). Each delegation is responsible for presenting a country report. The information would shed light on the progress of the country’s efforts to sensitize the public and speak to achievements on the way to implementing the SDGs.
Today’s meeting concludes with a women’s rally through the streets of Charlestown which culminates at the Villa Grounds. There will be a concert with a number of local artists including women playing steel pan, reciting poetry and the highlight will be singer Destra Garcia from Trinidad.
On day two of the meeting, the issue of women in leadership and women in politics will be the focus. A number of professionals are slated to speak on the inherent issues encountered by women who want to enter into elective politics. 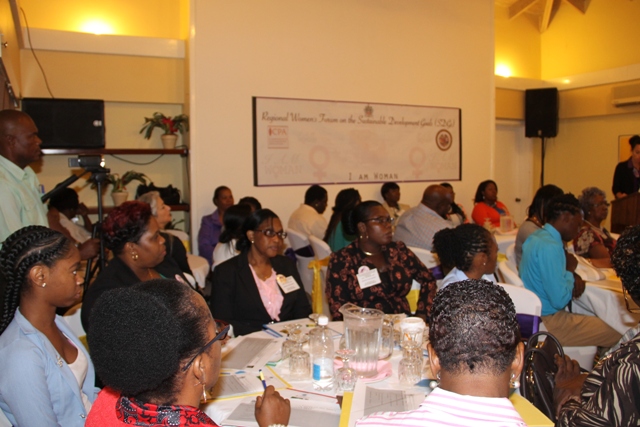