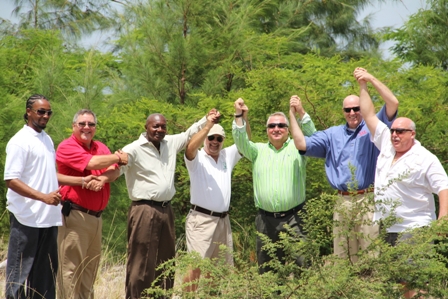 The announcement came on Tuesday from General Manager of West Indies Power (WIP) Mr. Rawlinson Isaac, the company contracted to provide geothermal energy to Nevis, during a visit to the site of the geothermal power plant at Spring Hill.

He was at the time accompanied by WIP’s Chief Executive Officer Mr. Kerry McDonald and representatives of the British based drilling company Marriott Drilling chosen to drill the production wells and representative of the US based company CCC Group Inc. that was selected to construct the geothermal plant.

“We are ready to go. I know we are waiting on the Export Import Bank’s (ExIm) approval but it is fair to say that we have enough resources [or] funding to proceed with the next phase…This is the production phase and I think we are proud to announce that we have secured the funding for the development phase. 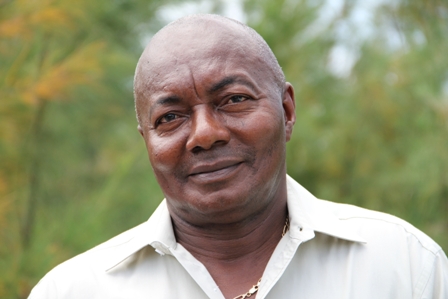 “The ExIm Bank funding is for what we call our third phase of the third phase of the development and so therefore I cannot leave the mike without always making one final comment. I really want to thank the Nevis Island Administration (NIA) led by the visionary Joseph Parry,” he said.

Meantime, Managing Director and Owner of Marriott Drilling Group Mr. Paul Marriott who was accompanied by Project Supervisor Mr. Alain R. Langlois, confirmed that his company had been engaged by West Indies Power to carry out drilling services from its Central American Facility in Belize. He explained their visit to Nevis was to plan ahead for the arrival of the equipment and moving it to its Spring Hill destination.

“We are here doing reconnaissance on the logistics to move what is quite a large drilling rig in and the first phase will begin in August and time to start drilling will be the first of September.

“There is quite a lot to do and arrange but things are going well and we are very pleased to be part of this project which could be one of the world’s leaders, in fact to provide geothermal energy to a small island which may expand to others and I am very pleased and excited to be involved,” he said.

According to Mr. Marriott, his 65 year old company founded by his great grandfather was not new to the Nevis project and had drilled geothermal wells in Africa, Central America, Sweden, Germany, England and Ireland. The specialised drill rigs, he explained, were built solely for geothermal wells at depths of 3,000-10,000 feet. 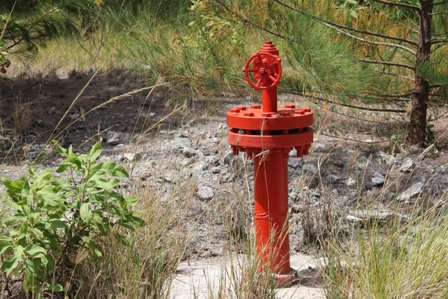 “It is what we call a triple rig and it a diesel electric rig it is driven by four large 1200HP diesel engines providing 4meggawatts of power. It is capable of giving the large diameters which geothermal wells require. The same rig has drilled the wells for the power plants in Guatemala Akiah which produce similar amounts of steam to the ones planned here in Nevis

“The drill is less than three years old it was built in Louisiana, it is all American built equipment and specialised larger pumps, ancillary equipment and tulling to drill high temperature geothermal wells, which we have every reason to believe that these will be. The drilling rig derrick is 152 feet from the sub structure and the sub structure is 27 feet, so it’s close to 180 feet in total. It is a much larger rig than what was used for the exploration phase,” he said.

Notwithstanding, he assured residents that the company would attempt to move the equipment with minimum disturbance to the population and it would be done during the daylight hours efficiently and quickly.

Meantime, Division Manager of the CCC Group Inc. based in San Antonio Texas Mr. Jim Wickens, noted that his company which had also been in business for over 60 years, was contracted to deal with the plant relocation and construction on Nevis.

“We are presently on the way with the tear down of the equipment in Utah of the United States. That has just recently started and we will be shipping parts through the Huston area and other ports to Nevis this Fall. We will be shipping about 550-600tonns of equipment and material here and then they will be trucked on to the site,” he said.

He introduced the Company’s forward Project Coordinator Mr. Carter LaBarge who had recently arrived on Nevis to set up office, remain onsite to coordinate the early activities with the geothermal surveys, site surveys and site development, for the purpose of early drilling. The major operations, he noted, would be moved to Nevis later in the summer.

“Initially we have to set the site up and scrub the area and prepare it for occupation and lay diamond storage. The drillers will be the first organisation on site and then we will follow on and be preparing the site as we go step by step,” he said.