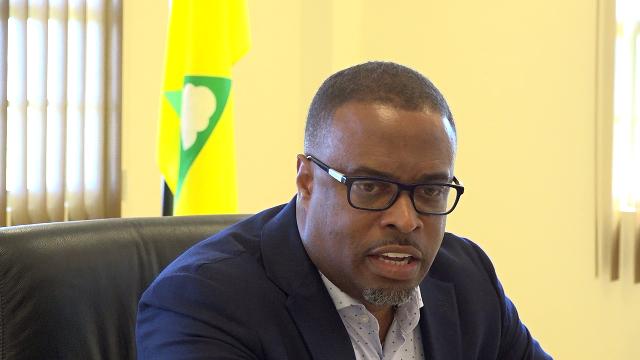 Hon. Mark Brantley, Premier of Nevis at the first meeting of the Nevis Island Administration Cabinet in Cabinet Room at Pinney’s Estate on January 08, 2020

NIA CHARLESTOWN NEVIS (January 08, 2020) — The Cabinet of the Nevis Island Administration met for the first time on January 08, 2020, in Cabinet Room at Pinney’s Estate, and Hon. Mark Brantley, Premier of Nevis used the opportunity to pay homage to Hon. Joseph Parry, for his service to the people of Nevis following his official exit from active politics as of December 31, 2019.

“Colleagues I think that we would have all heard the news that the Hon. Joseph Parry has decided to leave the political stage entirely. Having already left the leadership of his party, he has now sent communication to indicate that he is leaving the representation of his constituency which is St. Thomas’.

“I wanted to take an opportunity on behalf of the Cabinet to extend best wishes to Mr. Parry on his new journey, to thank him for the years of service that he has given to the people of St. Thomas’ and to the people of Nevis.

“He has served in various capacities – as a minister of government both at the federal level and at the local level. He has served as the Premier of Nevis, the highest office in Nevis. He has served as a member of the Opposition and I believe that on any measure, he would have made a contribution over the past three decades plus.

“So I wanted on behalf of the Cabinet to use this opportunity on the first day of our Cabinet, the first day that we are meeting for the new year and the new decade to extend to Mr. Parry all the very best on his new endeavours and on his new journey.”