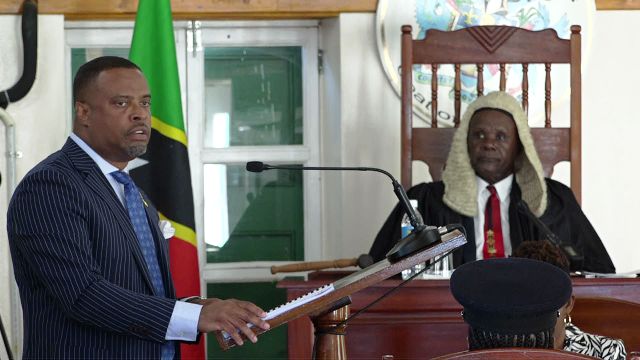 Hon. Mark Brantley, Premier of Nevis and Minister of Finance, in the Nevis Island Administration delivering the Budget Address at a sitting of the Nevis Island Assembly on December 05, 2018, while President of the Assembly Hon. Farrel Smithen looks on

With the theme “Harnessing the synergies of Innovation and Entrepreneurship while increasing Global Competitiveness to achieve our Socio-economic Goals,” Mr. Brantley said the budget represents an increase of 18.75 percent over the 2018 budget estimates.

“This increase is mainly as a result of the need to make a provision in our recurrent budget for Principal Repayment on Treasury Bills held on behalf of the British American Insurance Company. The full amount of these Treasury Bills, amounting to $11.24 million, is due and payable by December 31, 2019,” he said.

Mr. Brantley added that provisions for the enhancement of the healthcare system on Nevis is also responsible for the increase.

An additional amount of $30 million is expected from revenue generated from Passport Processing Fees under the Citizen by Investment Programme for St. Kitts and Nevis.

The combined total Recurrent Revenue is projected at $167.78 million for the upcoming 2019 fiscal period as compared to $180.75 million in 2018. It represents a deficit on the recurrent budget of $12.97 million.

For Capital Expenditure, $89.20 million has been allocated, which represents a 37.85 percent increase over the allocation for the fiscal year 2018.

Funding for the capital budget will come from loan funding from the Caribbean Development Bank (CDB), disbursements from the Sugar Industry Diversification Fund (SIDF), the Hurricane Relief Fund, the Sustainable Growth Fund and other grant funding.

In addition, he stated that the administration would seek loan funding from other financial entities at concessionary rates not exceeding 3.5 percent per annum to complete the funding for the capital works.

The NIA has also embarked on what Mr. Brantley described as an innovative debt-swapping initiative in which it intends to substitute high cost debt for lower cost debt.