Premier of Nevis, Hon. Joseph Parry
CHARLESTOWN, NEVIS (Monday, October 8th, 2012) — A clarion call from the Premier of Nevis, Hon. Joseph Parry for the Four Seasons Resort to keep its side of a bargain has been met with a prompt response. Speaking at a Nevis Reformation Party (NRP) public meeting in Fountain Village on Friday night, Premier Parry told listeners that the Four Seasons Resort Hotel had withheld funds collected in Trust for the Nevis Tourism Authority (NTA), and he demanded that it be handed over in the coming days.

Premier Parry announced Monday that he had received a call from Four Seasons General Manager, Mr. Andrew Humphries on Sunday promising to make the payment to the NTA this week.

The funds in question originate from a 2% Accommodation Tax that all hotels and tourism-related business places are required to pay since January 2012. The authority comes from a Bill that was passed in the Nevis Island Assembly in November 2011. All hotels on Nevis agreed to collect and pass on the levy to the NTA with the exception of the Four Seasons Resort-Nevis, which has refused to pay the tax despite the legislation. The Four Seasons argued that the government exempted them from any taxation as a result of a policy.

The government agreed on the basis that they split the increase on the environmental levy so that the NTA would have money to carry out its business of promoting the destination. The Four Seasons increased the Environmental Levy and ignored the government.

Finally around June, they stated that they will collect the 2% Accommodation Tax from their guests and pass it on to the NTA by July 1, 2012. Over three (3) months have elapsed.

Sunday, Mr. Humphries called the Premier to indicate the matter will be resolved soon, with the Four Seasons making good as early as this week.

In typical fashion, Leader of the Federal Opposition and co-leader of the Concerned Citizens Movement (CCM), Mr. Mark Brantley, who has developed an uncanny knack for taking anti-Nevisian stances on matters of vital importance to the well-being of the island, took to the airwaves Monday morning to lambaste the Nevisian (Premier, Hon. Joseph Parry), whose strong representation has brought so much good to his people. 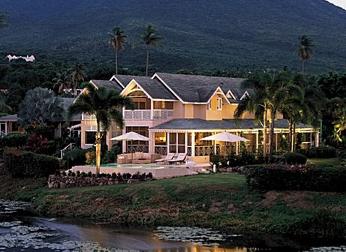 The NTA which by a release dated October 1, announced that it had hired the Portfolio Management Group (PMG) based in New York City, a new PR partner for the United States and Canada. The release said PMG will work to promote Nevis through a strategic mix of media relations, digital communications, and consumer marketing initiatives.

The release quoted NTA Chief Executive Officer (CEO), John Hanley as saying that the Portfolio Management Group was selected based on a highly competitive criteria following a tender process that garnered more than 10 expressions of interest. He said the firm demonstrated, “a true understanding of our core mission and we believe they will be instrumental in taking the Nevis brand to new heights”.