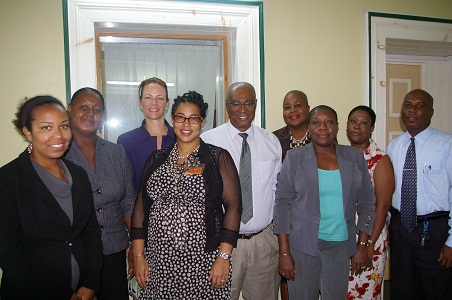 Premier of Nevis, Hon. Joseph Parry along with the delegation from the United States Embassy (Barbados), members of the Nevis Community Affairs Department and Barbados-based organization officers
CHARLESTOWN,NEVIS (Friday, September 7th, 2012)– Premier and Minister of Community Affairs, the Hon. Joseph Parry met with a delegation from the United States Embassy (Barbados) and other Barbados-based organizations on Wednesday afternoon, to discuss the welfare of women and children in Nevis.
The delegation consisted of Ms. Merilyn Rice-Bowen of CARIWA, Heather Stewart of UNICEF, Public Affairs Assistant at the U.S Embassy. Ms. Mary Greaves, U.S Embassy political and economic affairs officer, Ms. Kristen Mencer and Counselor for Public Affairs at the US Embassy, Ms. Rebecca Ross.

The Premier spoke with the delegation in the Conference Room of the Bath Hotel, where he explained what he would like to see in relation to the wellbeing of women and children in Nevis.

“The Community Affairs department has been very instrumental in developing programs for our elderly and training the island’s young people. I want to go even further by saying this administration has worked tirelessly by empowering women with home ownership and assisting them with small business entrepreneurship, but as far as intimate issues such as domestic violence and child abuse there is still more that could be done to eradicate it on Nevis,” stated Premier Parry.

The meeting was designed so that the organizations and the local departments could brief the Premier, and receive his feedback on their strategies leading up to workshops related to a marketing campaign on the well being of women and children.

According to Ms. Mary E Greaves, the delegation has sought meetings with persons from the Gender Affairs Bureau, Child Protection Services, social workers and other experts in the field who are capable of giving advice and guidance.

“An effective catch-line to sensitize the country on this issue would be “ Eye on the Child” with logos bearing an eye giving a two-fold impression of being watched.

“In this regard an intense campaign launch which would capitalize on this concept and raise awareness of this social ill is envisioned,” said Ms. Greaves.

In addition to a campaign on the welfare of children, domestic violence against women will also be addressed.

The campaign will take the form of group workshops with women’s groups, church groups and teenagers. A public meeting and the distribution of books and other items will be centered around the theme.

The U.S Embassy in Barbados is presently working towards issuing a grant to the department of Community Affairs in implementing the campaign on Nevis.