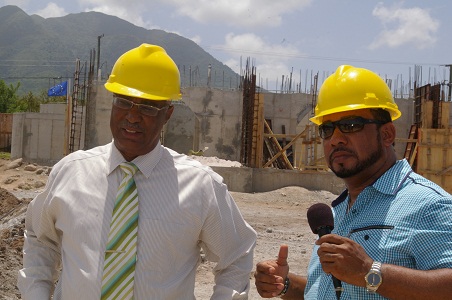 Premier of Nevis, Hon. Joseph Parry and local investor, Mr. Greg Hardtman
Charlestown, Nevis (Friday, September 7th, 2012) — Premier of Nevis, the Hon. Joseph Parry told local investor Mr. Gregory Hardtman that “it is good to see that there are construction workers from St. James Parish, Gingerland, the Parish of St. John’s, Charlestown and St. Thomas Parish, and they are all working together and building Nevis.”

The Premier made the remarks on Friday during a visit to Phase 1 of the Tamarind Cove Marina Development (TCMD) at Cades Bay Estate on Nevis’ west coast, after being told by Hardtman there were 50 local workers from all over Nevis employed on the project.

He said the Nevis Reformation Party (NRP)–led Administration had encouraged and assisted Hardtman, the managing director of developers Hardtman & Associates, so that his idea for the first marina on Nevis could become a reality.

When ground was broken for the project in mid-November of 2011, the Premier said that while the global economy was in a recovery state, it was commendable that Mr. Hardtman had the foresight to find business partners who were prepared to invest millions, and move forward on the long proposed Marina development. He said it would bring employment and progress to Nevis. 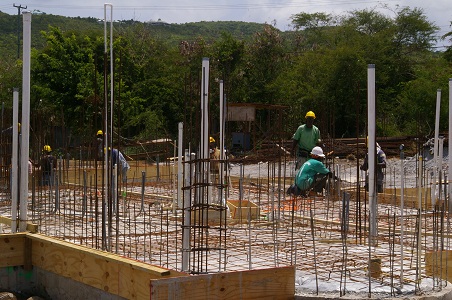 Construction started in the first quarter of 2012.  When completed the upscale marina will include an 80-100 slip marina for yachts of all sizes, high-end living accommodations, a yacht-club with a lounge, a pool, a restaurant and a members-only casino.

“The project is slated to create over 100 permanent jobs on completion and will endeavour to employ all local persons except in cases where required skills are unavailable within the local workforce,” said Mr. Hardtman.

The Tamarind Cove Marina Development will be constructed in three phases and it is anticipated that it would be fully completed in mid to late 2014.