(L-R) Members of an ad hock committee set up by Premier of Nevis and Minister of Tourism Hon. Joseph Parry to supervise the refurbishment of the Charlestown Port cruise facility Mrs. Shelisa Martin Clarke and Chairman Mr. Laurie Lawrence
NIA CHARLESTOWN NEVIS (SEPTEMBER 07, 2012) — Officials on Nevis have answered the call of small cruise ship operators for upgraded facilities at the Charlestown Port. The refurbishment project, already in progress, is being funded with an EC$1million grant to the Nevis Island Administration (NIA) from the Sugar Industry Diversification Foundation (SIDF) based in St. Kitts.

Chairman of the Nevis Air and Sea Ports Authority (NASPA) to oversee the refurbishment project Mr. Laurie Lawrence, told the Department of Information on September 06, 2012, that work had already commenced with the expectation that the project would be completed in time for the 2012 Cruise Tourism Season in late October.

“The goal of this committee is to ensure that the Charlestown facility is upgraded and meet the standards required of the cruise lines because the Premier is trying his best to expand cruise business into Nevis…In the past we have had problems because many of the cruise operators have been dissatisfied with Nevis in certain areas.

“For instance our bathroom facilities are inadequate; the pier is not safe because it has been damaged by storm surge over the years. We have some issues with drainage which sometimes causes the area to be untidy and smelly. So we are going to try our best to improve the environs…We are in the process of improving the facilities and we believe that we could put forward a very, very strong case for increasing the number of cruise ship calls to Nevis,” he said. 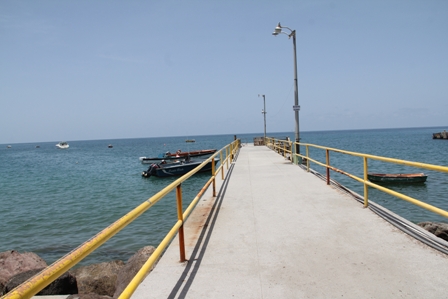 Meantime, Mrs. Clarke who accompanied Mr. Lawrence, used the opportunity to highlight areas where the grant funds would be used, among them the rest room facilities, the sewage system and the Cruise Pier.

“Some of the monies would be used to upgrade the bathroom facilities at the Charlestown Port and would include retrofitting the bathrooms with commercial toilets and sinks and also to have in place a bathroom attendant especially during the cruise season. We are also looking at upgrading the sewage system and at present there are some technicians working on that particular aspect of the project. 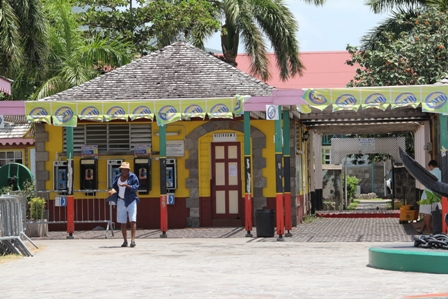 “We are also looking at fixing the small pier used for tendering during the cruise season. We are also looking at some of the monies for cleaning and clearing the drains in and around Charlestown. We are having some problems with drainage and there have been some complaints about the stench as well, so that’s where the Ministry of Health comes in,” she said.

According to Mr. Lawrence, the projects have to be completed ahead of the Cruise Tourism Season but there were additional issues they also had to address. 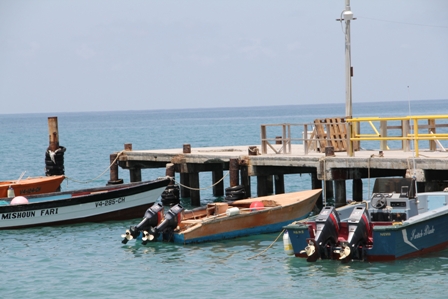 Notwithstanding, Mr. Lawrence noted that the most challenging matters the Committee would have to deal with was the repairs to the Pier.

“The only challenge really is the cruise pier that will take some time. We have already identified a contractor and we are hoping that they could start immediately so we could be ready.

“To demolish the pier, we looked at that option but it turned out to be too expensive. So we would be doing significant repairs it would cost us in the region of $400,000. Right now if you look at the pier, part of the pier has been cordoned off because it cannot be used, it’s unsafe. So we might have to put some piles in, do some concrete work and it will take some time but we are not demolishing, we are rehabilitating what is there with the resources that we have,” he explained.