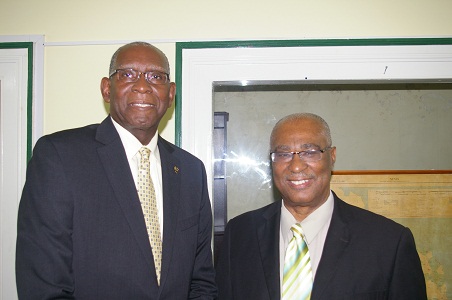 (L- R) UVI President, Dr. David Hall and Premier of Nevis, Hon. Joseph Parry at the Premiers Bath Hotel Office
CHARLESTOWN, NEVIS (Wednesday, September 5th, 2012)– President of the University of the Virgin Islands (UVI), Dr. David Hall has said that it has been a pleasure to have Nevisian students at UVI, as they have been exemplary academically and socially.

“I have been very impressed with the students that have come out of Nevis, as they have been impressive academically, and as campus leaders, and I just want to receive more students from Nevis to attend UVI,” President Hall told Premier and Minister of Education the Hon. Joseph Parry during a recent visit to Nevis. Hall told the Premier that this was his first visit to the island, and he was thoroughly enjoying his stay.

As part of UVI’s vision to attract more students from the sub-region, President Hall met with Premier Parry to negotiate a number of matters, including tuition rates, which would be the same for Nevisian students as native Virgin Islanders.

Dr. Hall noted that the meeting with Premier Parry was very productive, and ways and means of strengthening the ties between the University and Nevis were discussed, including ensuring the affordability of a university education.

The Hon. Joseph Parry who continues to demonstrate his government’s commitment towards advanced education, said that the Nevis Sixth Form College would benefit from the relationship. He also noted that the University had charted a new course of becoming a global leader in education, and Nevis was part of the package as the University seeks to upgrade and expand in areas such as green technology and distance learning capabilities.

“Dr. Hall and myself talked about goals of entrepreneurship courses and an engineering school, as well as the establishment of a medical school,” said the Premier.

Pertaining to new recruits, President Hall said, the objective is to have the meeting and negotiations complete by October 2012 so that students enrolling in UVI for the Spring Semester 2013, would reap the benefits.

“I have been very pleased to see the important contributions of the Alumnus of UVI here on Nevis, and I hope that with the many opportunities before the Nevisian students, they will soon be a part of the UVI family, and make their contribution to their homeland too,” concluded Dr. Hall.

Premier Parry wished the school best wishes as it celebrates its 50th anniversary, and said that he hoped the ties that bind the University and Nevis would continue. The institution which is located in the United States Virgin Islands, with campuses on both St. Thomas and St. Croix, opened its doors as the College of the Virgin Islands in 1962.