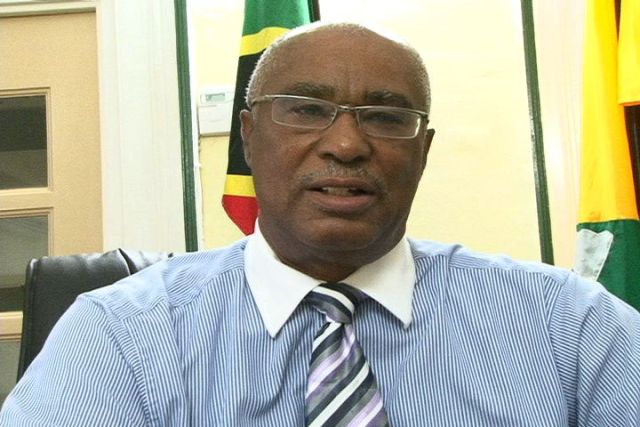 Premier and Minister of Finance in the Nevis Island Administration Hon. Joseph Parry
NIA CHARLESTOWN NEVIS (SEPTEMBER 05, 2012) — A Canadian based company announced its intention to bring a $400million investment to Nevis and the creation of jobs for hundreds during construction. Later, about 150 permanent jobs will be available on completion and the project is slated to bring revenue to the Nevis Island Administration’s Treasury.

The announcement came from Canadian Global and its investors and affiliates in a press release dated September 04, 2012. It said the proposed project will consist of a tank storage facility for refined and unrefined hydrocarbon products.  The Company also indicated that it had already earned rights to lands at Pembroke Estates in Nevis where the facility would be located.

Premier of Nevis and Minister of Finance in the Nevis Island Administration (NIA) Hon. Joseph Parry in response to the release, later that day, told the Department of Information that the Administration welcomed the investment and regarded it as a project which would from part of an ongoing plan to diversify the economy of Nevis.

“We welcome the investment. It is part of our strategy to diversify the economy. You would remember that I have been speaking about diversifying from tourism to other industries so that if there is a downturn in tourism, we will have people working still,” he said.

Mr. Parry explained that he was first contacted about the planned project by Mr. Thomas Williams, a Kittitian whose father is Nevisian and later by Canadian Mr. Bill Powdar and his team. They met earlier this year in Boston, USA to discuss the project.

“We agreed that they had to do a serious Environmental Impact Assessment (EIA) by a top international firm and this is what they are doing. They have indicated that they have their finances worked out, that they have contracts with their suppliers and they actually have an agreement with a land owner here on the island of Nevis to purchase a bit of land at Pembroke Estate in the South-western part on the island of Nevis away from the population,” he said.

The Premier noted that the Administration had since looked at situations and scenarios, to ensure that the project would not jeopardise the island’s tourism product and were satisfied it would not.

“We have looked at the situation in our neighbouring island St. Eustatius, it has a similar facility and we see no contamination. All the safety measures and all the checks and balances would be put in place. I am told that during the construction period, several hundred persons will be employed maybe 300 or more. When it is completed about 150 permanent workers would be there, mostly men but that is what we need,” he said.

Mr. Parry expressed the view that it was important for jobs to be made available in and outside of construction since provisions for additional jobs had already been in place for the island’s women.

“The women are taken care of as you know with all that is going to happen at Christmas time at Deon’s project [Nelson Spring Development] and Greg’s project [Tamarind Cove Marina Development] later and Brown Hill Communications. So we are putting ourselves in a position where all Nevisian men and women would be working,” he said.

Meantime, in response to a question, the Premier noted that the project would have a positive effect by way of a reduction in the price of fuel locally.

“It will bring down fuel prices here and that is an arrangement we will make. It is something that we have discussed and it is very likely the [fuel] surcharge will be removed,” he said.

Notwithstanding, Mr. Parry stated categorically that the proposed project would have no impact on the progress of the geothermal project.

The Finance Minister also reminded that with the realisation of the geothermal project, Nevis would still require one or two diesel generators available.

“That is something that we have always said. So we will be buying less fuel but we will still need to have some fuel but the idea of having the plant here is not primarily to service Nevis but to service other neighbouring islands,” he said.