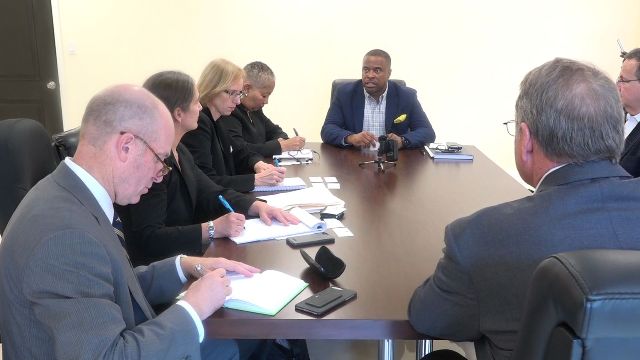 Hon. Mark Brantley, Premier of Nevis and Mrs. Hélène Ann Lewis, Legal Adviser to the NIA (to his immediate left) meeting with representatives of the Overseas Private Investment Corporation (OPIC) based in Washington (left), and geothermal developers of Nevis Renewable Energy International (right) at his office at Pinney’s Estate on July 30, 2018

Mr. Brantley made the comment at a meeting with a team from the Overseas Private Investment Corporation (OPIC) based in Washington, the United States Embassy to Barbados, the Eastern Caribbean and the Organisation of Eastern Caribbean States (OECS) based in Barbados and Executive members of the Nevis Renewable Energy International (NREI) at his office at Pinney’s Estate on July 30, 2018.

“We see oil prices creeping up again and that for us is a very, very real concern because it means that our economic fortunes continue to be tied to circumstances over which we have no control.

“With geothermal, I think, we can lock ourselves in for 25 years, 30 years as the case might be, to a fixed price if you will. A price that we know…and I think that would help immeasurably in helping us to plan and determine where we go in terms of our economy,” he said.

The Premier stated that the NIA believes the island could be the first to truly say it is entirely green and has weaned itself off fossil fuels for electricity generation.

“We feel that it is a game changer particularly because the science is suggesting to us that we have far more geothermal energy than we can use and if that is the case, then it means that it augers well for our future expansion, the growth of our economy, that we can be self-reliant and self-sufficient in so far as energy is concerned but it also means, of course, that we have potentially the prospect of export of energy,” he said.

Mr. Brantley noted that diversifying the economy for Small Island Developing States (SIDS) that are not blessed with a vast array of assets is difficult. However, Nevis is blessed with geothermal energy and the administration intends to exploit it to revolutionise the island’s economy.

He said the NIA is working closely with the NREI, who they have contracted to harness the island’s geothermal energy.

Meantime, the Premier expressed gratitude to the United States Government for its assistance with the project so far, a partnership he believes, should also serve as a model between the US and the SIDS on other issues.

“We think it could be a model of US cooperation and involvement in Small Island Developing States. We talk a lot about renewable energy. We talk a lot about mitigating the consequences of climate change and the increasing ferocity of storms and the like and I think that this is a concrete example of the partnership and so, I wanted to publicly thank the United States government,” he said.

The visiting OPIC delegation led by Ms. Marlena S. Hurley, Director, Political Risk Insurance & Reinsurance Structured Finance and Insurance Department included Ms. Nicole D. Soulanille, Assistant General Counsel and Mr. Christopher M. Ausdenmoore, Political/Economic Officer at the US Embassy in Barbados, are on a three-day fact finding mission on Nevis at the invitation of NREI, ahead of the construction phase of the geothermal project.

While on the island, they are expected to meet with officials of the Nevis Electricity Company Limited, various other officials in the NIA, and other stake holders including the Four Season Resort, Nevis.