Justin “Hero” Caslell, renowned Montserratian Calypsonian and Soca Artist and facilitator of a Calypso Writing Workshop on Nevis in session with junior calypsonians for the second day at the Hardtimes Community Centre on April 19, 2017
NIA CHARLESTOWN NEVIS (APRIL 19, 2017) — Renowned Montserratian Calypsonian and Soca Artist Justin “Hero” Caslell and facilitator of a Calypso Writing Workshop on Nevis, says he is excited at the opportunity to work with young children because they are the future of calypso.
He said, calypso appears to be on the decline, due to threats by other types of music including Soca, a hybrid of the art form. Caslell believes, that the onus is on those with the knowledge and experience to try to teach others, particularly the younger generation, in an effort to save calypso.
“This is why that I think my role here is so important, in terms of the future of calypso in the Federation of St. Kitts and Nevis and indeed the rest of the Caribbean.
“I’ve done workshops before in other countries but the level of interest that I have experienced in Nevis is tremendous. I’ve been working for my second day now with a number of kids, about six of them and the enthusiasm shown by them is very inspiring to me,” he said.
The workshop which began on April 18, 2017, at the Hardtimes Community Centre in Gingerland is the brainchild of the late Carl Williams, Permanent Secretary in the Ministry of Culture. It is being hosted by the Culturama Secretariat, through the Calypso Sub Committee headed by Mr. Keith Glasgow.
It began on April 18, 2017 with five nightly sessions for senior calypsonians and four daily sessions for junior calypsonians. A total of 10 senior calypsonians have been participating and six in the junior sessions.
The facilitator said so far, he has been able to draw from the junior calypsonians skills that they probably didn’t think they possess, in terms of composing their calypsos and coming up with titles and themes. On day two, they have been addressing the lyrical framework as it pertains to lyrics.
Caslell, is the brother of famed Soca Ambassador of the Caribbean the late Alfonso “Arrow” Caslell. He was responsible for the composition of his brother’s albums from 1980 till his death. He later worked with Byron Lee & the Dragonaires and is the singer and writer of “Tiney Winey” a song heard by millions around the world. 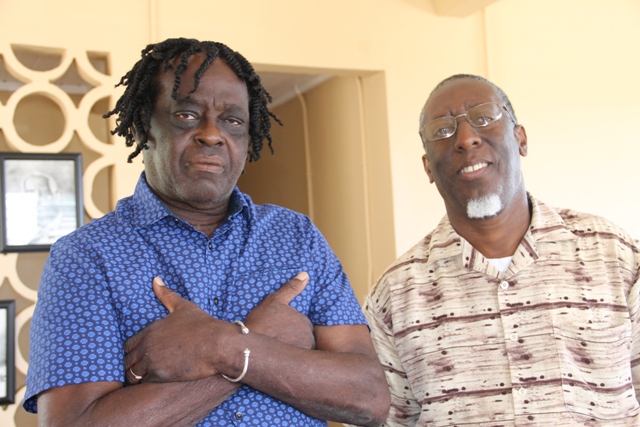 Meantime, Antonio Abonaty Liburd, Chairman of Culturama 2017, said so far the workshop has been an in-depth one. On day one the issue of Intellectual Property Rights was discussed. Participants were told that as artists they stood to harvest a lot of money from their calypsos and if they ventured to copyright and register their material, they could also benefit from royalties.
He said so far the junior calypsonians have benefited tremendously from the workshop and has already received commendations from parents about the level of enthusiasm the workshop has generated for their children.
Liburd also noted that so far the junior participants have been enjoying the workshop and he looks forward to the benefits being realised.
“I am only looking now into the future that five, six, seven maybe eight years down the road, these children here at this workshop would have blossomed into prolific writers and into good stage performers and good junior and then senior calypsonians,” he said.