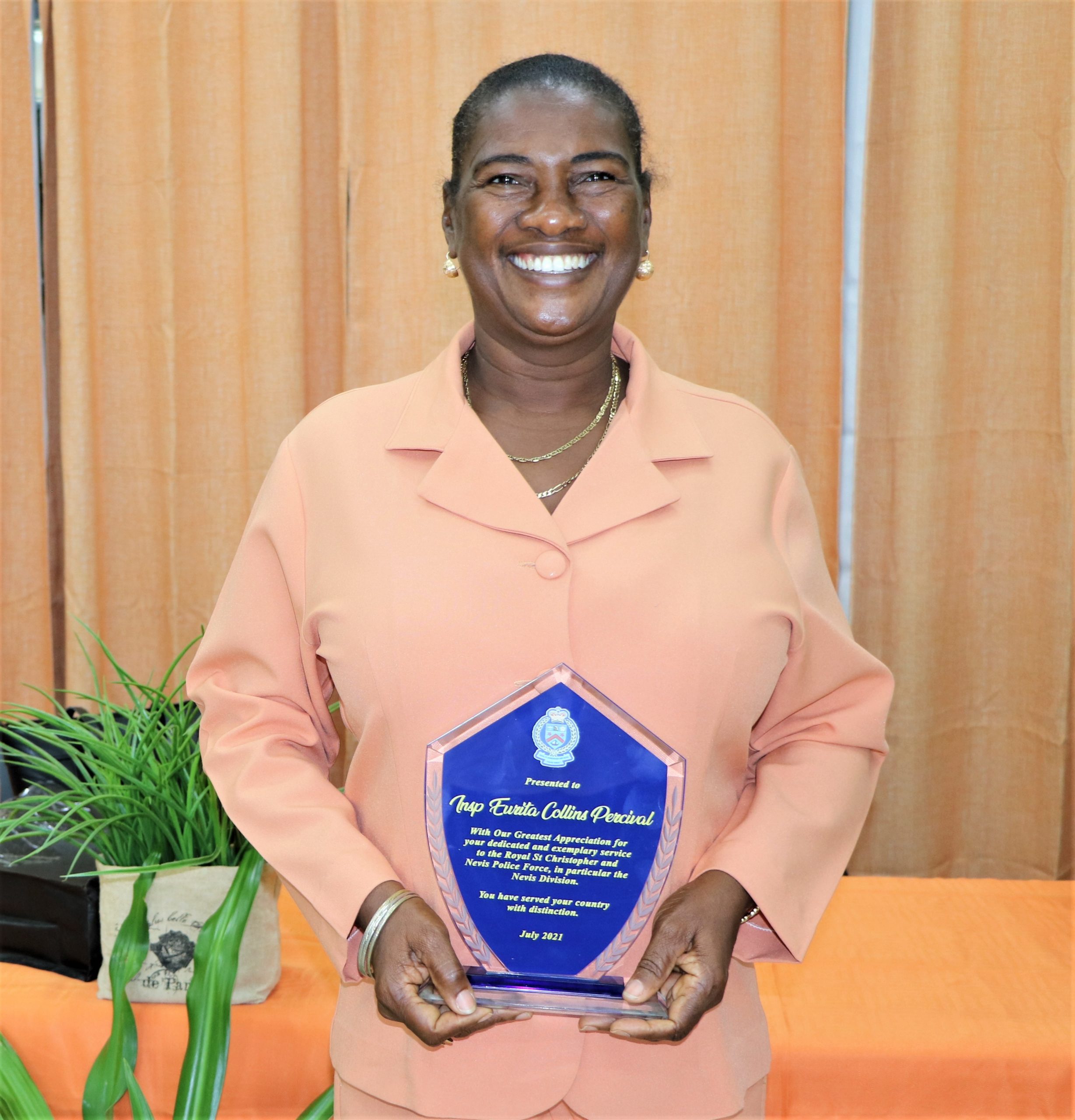 Inspector Eurita Collins-Percival (retd) awarded for 26 years of stellar service as an Officer in the Royal St. Christopher and Nevis Police Force during a Recognition and Appreciation ceremony at the Charlestown Police Station, July 16, 2021

NIA CHARLESTOWN NEVIS (July 19, 2021) – Insp. Eurita Collins-Percival was on Friday, July 16, 2021, extolled for her dedicated and exemplary service as an officer in the Royal St. Christopher and Nevis Police Force during a Recognition and Appreciation ceremony marking her retirement after 26 years in the organization.

Insp. Collins-Percival joined the police force in 1995 as a Special Constable in St. Kitts, attaining the highest score on the Police Entry Exam two years later. In May 1998, she was adjudged the best recruit of Course #28, the first woman to hold the title.

She was transferred to the Nevis Division in February 2000. Over the span of her career Insp. Collins-Percival served in the Criminal Records Office, Local Intelligence Office, Violent Crime Unit (VCU), Criminal Investigation Department (CID), Crime Scene Unit, National Prosecution Unit, and was also assigned to Magistrate Court and Process duties.

Recounting some of the challenges faced during her career, Insp. Collins-Percival expressed gratitude to her former instructors and counterparts for the invaluable assistance and encouragement rendered. She called on the members of the Nevis Division to continue their collaborative efforts to better serve the citizens and residents.

“The CID, VCU, [Special Victims Unit] SVU staff, I know you think that I am hard on you…but I do what I do to get the best out of you and when I leave, I will know deep down in my heart that I can rely on you. I tried my best to teach you what I know so I now admonish you to continue to read and read and read…

“I want all of you to continue working together to keep Nevis safe,” she encouraged.

She also thanked her husband Mr. Derrick Percival and her family for their support and many years of personal sacrifice.

Supt. James Sutton, Divisional Commander for District C, Nevis, in presenting the award of appreciation said, “Insp. Collins-Percival gave most of her adult life of service to her country with distinction, from the rank of Special Constable to Inspector. Her contribution to this organization has been valued over these years and we hope that she enjoys her much-deserved retirement.”

Commissioner of Police Hilroy Brandy also offered words of commendation, thanking Insp. Collins-Percival for her significant contribution to the force.

“Having worked with Insp. Percival, especially at the CID I have recognized that she is an intelligent lady. She grasps concepts easily and uses critical thinking to address challenging situations. Insp. Percival, I admire you for your sustained display of punctuality and reliability. You have taught the members of the organization the art of loyalty and physical management. You have certainly left an indelible mark,” he said.