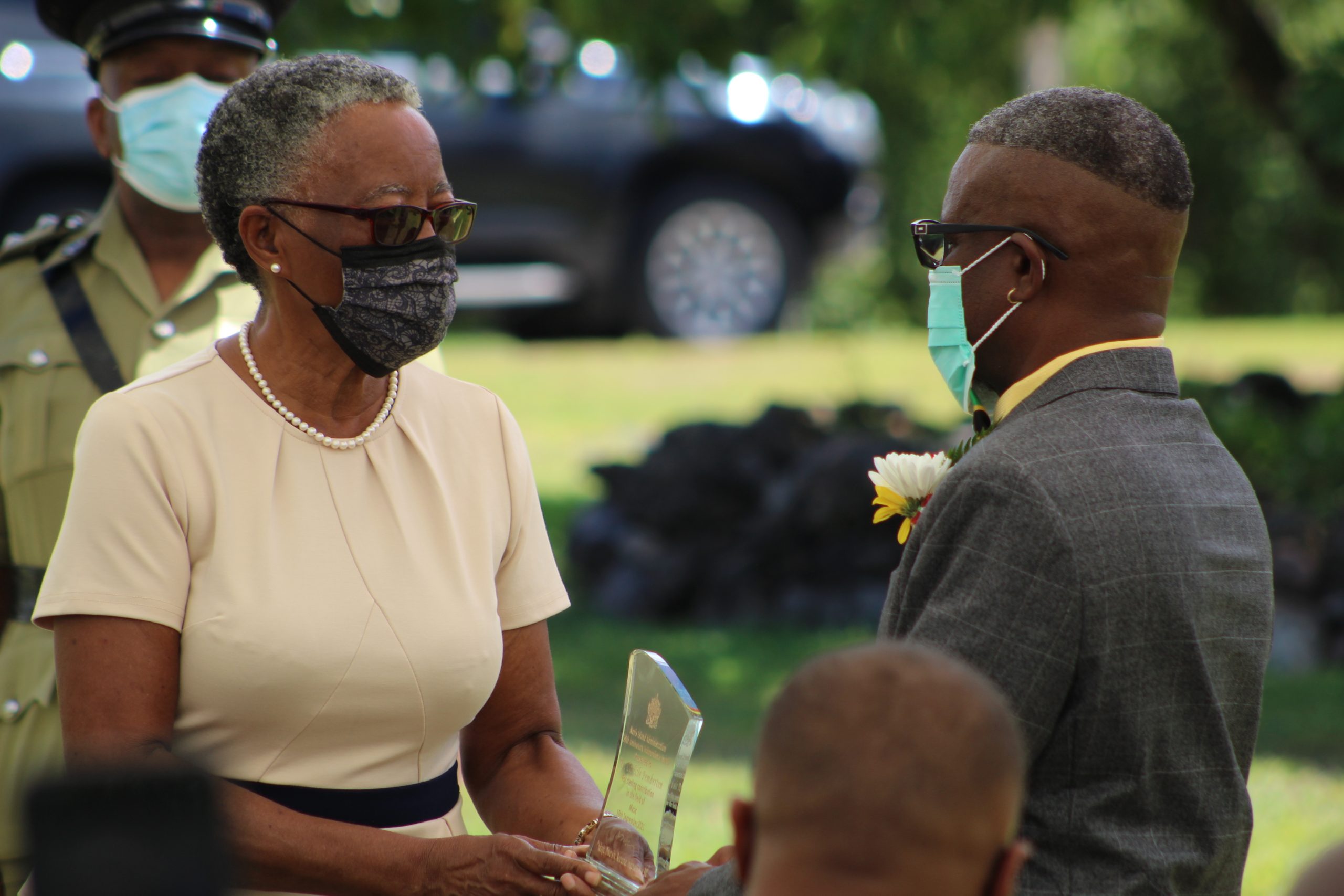 Mr. Carlisle “King Binghi” Pemberton of Brown Hill is presented with a plaque in honour of his contribution to Music by Her Honour Mrs. Hyleeta Liburd, Deputy Governor General in Nevis at an Awards Ceremony at Government House on September 20, 2021 on the occasion of the 38th Anniversary of Independence of St. Christopher and Nevis

NIA CHARLESTOWN NEVIS (October 11, 2021) – Mr. Carlisle Pemberton of Brown Hill, also known by his calypso name as King Binghi, was another of 11 Nevisians honoured during the recent celebration of the 38th Anniversary of the Independence of St. Christopher and Nevis for his contribution in the field of Music.

In his profile which was read at an Awards Ceremony at Government House on September 20, 2021, when he was presented with a commemorative plaque by Her Honour Mrs. Hyleeta Liburd, Deputy Governor General in Nevis, he was described as a proud Nevisian.

Born to parents Joan and William Pemberton, as a young Rastafarian who could play the guitar, he enjoyed all genres of music especially Reggae.

His love for Reggae music and inspiration came from Reggae artists including Bob Marley, Peter Tosh and Bunny Wailer. They also motivated him to begin writing his own reggae songs which he would perform at the annual African Liberation Celebration.

Mr. Pemberton also had a keen interest in the calypso art-form and paid close attention to calypso contests held locally, regionally and internationally. He had admiration for King Short Shirt from Antigua and Barbuda; the Mighty Sparrow from Trinidad and Tobago; and Sandopey (Curtis Morton) from Nevis.

In 1985, a confident Pemberton decided to compose two songs and entered the local Calypso competition with the sole intention of defeating King “Dis an Dat” and King “Meeko” who at that time reigned supreme in the calypso arena.

“After what he considered to be a most satisfying performance, the judges placed him 2nd runner-up. On cloud nine after such an excellent debut, but not content simply because he felt his purpose was not achieved, he told himself with such a superb start, the only way to go was up,” his profile stated.

The following year in 1986, King Binghi was not able to compete since he had travelled overseas. However, on his return to Nevis in 1987, a highly motivated King Binghi won his first Culturama Calypso crown with a popular tune “Jam Bouncer,” and his Calypso career took off from there. Later that same year he became the first Nevisian to represent Nevis at an international “King of the World Calypso Competition” in Barbados and performed creditably.

In the latter part of 1987, he was crowned as the first St. Johns’ Calypso King, during the St. Johns’ Parish festival.

King Binghi went on to win the Culturama Calypso crown in 1989, 1993 and 2013 after a hiatus of 10 years with his popular “SIDF” song. That same year he ventured to Anguilla to compete in the Leeward Islands Calypso Competition and placed 2nd runner up. According to his profile, it was the first and only time a Nevisian Calypsonian placed in that competition.

Another of his accomplishments was winning the Farm King crown in 2004, an event hosted by the Department of Agriculture.

In recognition of his accomplishments, in December 2004, King Binghi was awarded the title of Calypsonian of the Year by the Nevis Palm Awards Committee, for his outstanding performance in calypso throughout the year.

Mr. Pemberton’s brilliance at his craft, led to him being called out of “mini retirement” by the Nevis Culturama Committee to join and strengthen the Nevisian calypso team of three, who competed against the Kittitian Calypso team of three in the St. Kitts vs Nevis Calypso Competition. The Nevis team won the competition for the first time since its inception.

Apart from the many crowns he won, he also captured a few 2nd runner-up positions, and was first runner-up consecutively from 1994 to 1996 and then in 1998.

Pemberton, has always deemed it an honour to represent his home island Nevis on the regional and international stage whenever he had the opportunity to do so.

“Having performed in countries including, Antigua, St Maarten, The Virgin Islands, Barbados, Anguilla and the United States of America, he is elated to have done so, and although he has never entered the National Carnival Calypso Competition, he has not ruled out the possibility.

“King Binghi” is proud that he has not only penned all his songs but continues to assist participants of the Senior and Junior Culturama Calypso Competition, as well as being a source of inspiration for future calypsonians,” his profile said.

Today, Mr. Pemberton continues to urge the nation’s youths to continue honing the art form in an effort to preserve calypso for generations to come.

The Nevisian Calypsonian expressed gratitude to God for bestowing on him talent, strength and sustenance. He also extended his gratitude to his family in particular his parents for nurturing him; his wife Joan Stapleton-Pemberton, his most ardent and loyal supporter; and Jamoy and Javid Pemberton, his two children who he says bring him much joy. He also thanked his siblings and extended family who continue to embrace him.

He also expressed profound gratitude to his current employer of 28 years – S.L. Horsfords and Company Limited both management and staff for their support over the years, and his fans, supporters and sponsors. He also expressed gratitude to those who provided positive critique which led to successful development and growth.

Mr. Pemberton also thanked the Nevis Island Administration for selecting him as an honouree for the 2021 Independence Award.