L-R) Assistant Secretary in the Ministry of tourism Mr. Carl Williams and Tourism Marketing Officer Ms. Tamika Lawrence welcome Captain Vladyslav Nadolynsky to Nevis on board the vessel, docked outside the Charlestown Pier

CHARLESTOWN NEVIS (FEBRUARY 2010) — Premier and Minister of Tourism on Nevis, Hon. Joseph Parry said he welcomed the return of the Royal Clipper cruise ship to Nevis but described as unfortunate the incident which forced the ship to boycott Antigua and instead added Nevis to its by-weekly schedule.

“The Ministry of Tourism and I welcome the cruise ship to our shores,” he said during an interview with the Department of Information on Wednesday, after the vessel made an unscheduled stop in Nevis.

The Star Clipper was once a scheduled vessel during the island’s cruise season, however its last visit to Nevis was in 2006.

According to Tamika Lawrence, Marketing Officer in the Ministry of Tourism, the Tourism Department had been in negotiations with Star Clipper and the agent (Smith’s Enterprises) for the cruise ship’s return to Nevis. 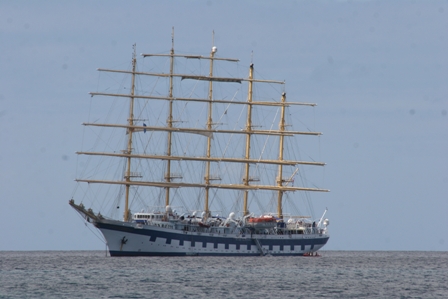 The Royal Clipper will visit Nevis every other Tuesday until the end of the cruise season when the ship will return to the Mediterranean and will later be re- route to the Caribbean again in November.

With much glee, Captain Vladyslav Nadolynsky indicated that the guests onboard the Royal Clipper loved Nevis because of it tranquil nature, rich historical heritage and the island’s Rain Forest.

“One concern that Captain Nadolynsky questioned about Nevis was the safety of the island”, said Assistant Secretary of Tourism, Mr. Carl Williams, who assured him that Nevis was a very peaceful place with friendly and welcoming people.

“We at the Ministry of Tourism are pleading to the people of Nevis to keep the island an upscale destination where guest security is concerned. Any harm done to a cruise passenger or a guest in general, can definitely jeopardise the islands Tourism sector”, remarked Mr. Williams.