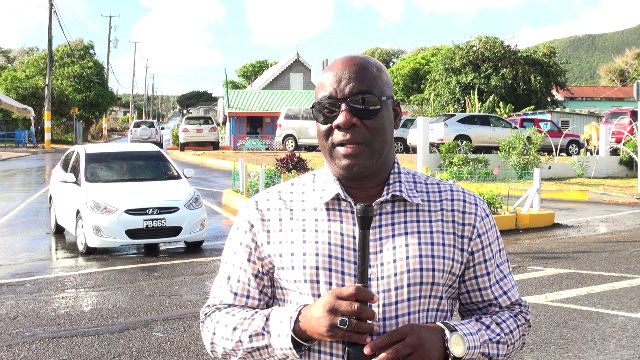 Hon. Alexis Jeffers Deputy Premier of Nevis and Area Representative for the St. James Parish standing at the entrance of Shaws Road in Newcastle on December 19, 2018

NIA CHARLESTOWN NEVIS (December 20, 2018) — Work continues in Newcastle to enhance the infrastructure, safety, security and attractiveness of the area. Hon. Alexis Jeffers, Deputy Premier of Nevis and Area Representative for the Parish of St. James expressed satisfaction with recent work done on the first phase of the Shaws Road Improvement Project.

Mr. Jeffers visited the area on December 19, 2018, to observe additional work done on what can be described as the longest uninterrupted stretch of road in Newcastle.

“When you drive up Shaws Road now, the environment as compared to what it once was is vastly improved…We have sought to enhance the area here on Shaws Road from the bottom all the way to the top… You will see a beautiful planter with some flowers which is meant to provide some beautification for the area…

“We have just erected some speed limit signs of 20 miles per hour. We have also done some painting of all of the electricity poles that are on the eastern side of the road heading up beyond Mount Nevis,” he said.

The minister explained that the speed limits are intended to reduce speeding to ensure minimal unfortunate accidents or incidents.

Mr. Jeffers explained that the poles were initially painted as a safety measure for drivers and pedestrians particularly at nights.

“The poles are literally in the road. There isn’t anything much that can be done since we do not erect poles on person’s properties anymore, so there is a limited set back there so at nights it was somewhat difficult to see these poles…

“We would have engaged the officer in charge of Her Majesty’s Prison and that is Officer Shawn Edwards who would have worked with us in terms of assisting us with a few inmates of Her Majesty’s Prison up there at Russel’s Rest, and they would have come here over the course of two weeks and painted all of the electricity poles…That has led to the beautification of Shaws Road… it has also improved the safety of the area,” he said.

Regarding preserving the beautification enhancements the project has brought to the area, the minister noted that the Nevis Island Administration (NIA) implemented maintenance measures.

“It is a beautiful piece of road, and that is why we have sought to do the things that are necessary to ensure we maintain the beauty that comes along with the road. As a matter of fact we have also employed someone to keep the sides of the roads clean, and he has been doing a marvellous job so far,” he said.

The first phase of the Shaws Road Improvement Project from Newcastle to Fountain Village commenced in early 2017. The second phase of the just over two-mile project is expected to commence in the first quarter of 2019.