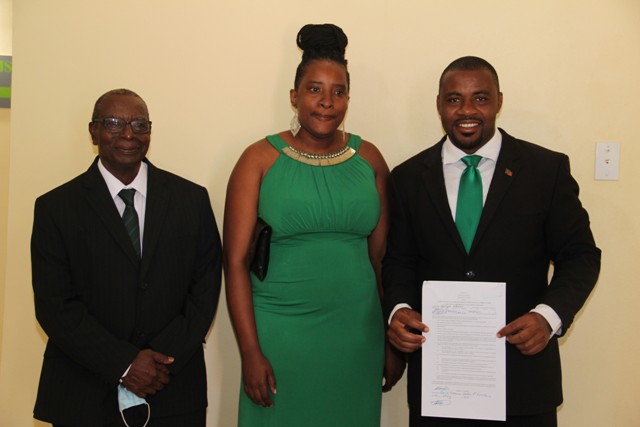 Mr. Bjorn Hanley (r) of the Nevis Reformation Party moments after he was nominated on May 27, 2020, at the David Freeman Centre of Excellence by Mr. Myron C. Liburd of Rices Village and Ms. Shakiela Morton of Hanley’s Road to contest the general elections in Constituency No.10 on June 07, 2020

NIA CHARLESTOWN NEVIS (May 27, 2020) — Six candidates on Nevis will contest the upcoming June 05, general elections in St. Kitts and Nevis.

On Nomination Day on May 27, 2020, three candidates were nominated by two registered voters each to run on a Concerned Citizens Movement (CCM) ticket and three on the Nevis Reformation Party (NRP) ticket.

In Constituency No. 10, Mr. Eric Evelyn of the CCM party was nominated by Mrs. Deslyn Evelyn of Hanley’s Road and Mr. Berley R. Walwyn of Hard Times to contest the elections; while Mr. Bjorn Hanley of the NRP was nominated by Mr. Myron C. Liburd of Rices Village and Ms. Shakiela Morton of Hanley’s Road. The Returning Officer at the David Freeman Centre of Excellence was Mr. Rohan Claxton.

In Constituency No. 11, the incumbent Mr. Patrice Nisbett of the NRP was nominated by Ms. Idona Browne of Jessups Village and Ms. Derika Camella Helena Parry of Shaws Road. Mr. Alexis Jeffers of the CCM was nominated by Mr. Stanley Williams of Newcastle and Ms. Neelia Maynard of Jessups Village. The Returning Officer at Cotton Ground Community Centre was Mrs. Ermileta Elliott.

In Constituency No. 9, the incumbent Mr. Mark Brantley of the CCM party was nominated by Mr. Dennis Browne of Brown Hill and Ms. Lorna Hunkins of Marion Heights. Dr. Kelvin Daly of the NRP was nominated by Ms. Saneldo Willett of Hamilton Estate and Mr. Devonne Cornelius of Lower Stoney Grove. The Returning Officer at the Bath Community Centre was Mr. Kevin Barrett.

At the end of their nomination, each candidate expressed satisfaction, their readiness to contest the election, and to provide proper representation for the people of Nevis in the National Assembly in St. Kitts and Nevis.