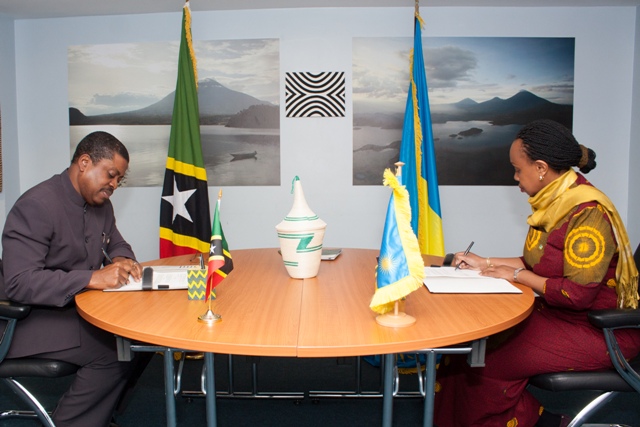 NIA CHARLESTOWN NEVIS (April 26, 2018) — The governments of St. Kitts and Nevis and the Republic of Rwanda, signed a mutual visa waiver agreement in London on April 26, 2018, which will allow their citizens to travel to each other’s country free of visa requirements for up to 90 days.

A release from the St. Kitts and Nevis High Commissioner’s office in the United Kingdom dated August 26, 2017, stated once all the requisite internal procedures have been completed, the Agreement which was initiated by Hon. Mark Brantley, Foreign Affairs Minister of St. Kitts and Nevis, will enter into force, guaranteeing that citizens of St. Kitts and Nevis and Rwanda who hold valid diplomatic, official or ordinary passports can enter, exit and transit each other’s territories.

The agreement fulfils a commitment of the government of St. Kitts and Nevis to strengthen its international partnerships and to improve relations across the globe. The move falls in line with Minister Brantley’s belief, that Africa remains an untapped resource for South-South Cooperation and that St. Kitts and Nevis is willing to be a bridge to narrow the divide.

On the heels of the recent Commonwealth Heads of Government Meeting (CHOGM) in London, His Excellency Dr. Kevin M. Isaac, St. Kitts and Nevis High Commissioner to the United Kingdom and his colleague, Her Excellency Ms. Yamina Karitanyi, High Commissioner of Rwanda to the United Kingdom toasted the occasion as an historic moment in the development of both countries’ relationship.

Both commissioners extended invitations to visit each other’s country. High Commissioner Karitanyi noted that the new Rwanda Air offers up to three flights a week from London to the Rwandan capital Kigali and offers a perfect opportunity to explore her country.

Rwanda, a landlocked country in Central and East Africa and one of the smallest countries on the African mainland will host the next CHOGM to be held in 2020.

That country endured a tragic history of genocide in 1994, however, Rwanda has transformed in two decades and continues to modernise. It is now considered one of Africa’s safest and most stable countries with annual growth rates of between 6 to 8 percent.