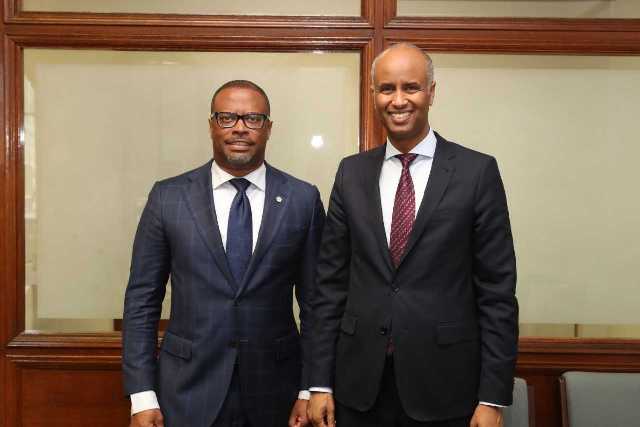 The Minister, who sees Canada as a strategic priority for St. Kitts and Nevis’ foreign policy, started his day with a courtesy visit with the Hon. Geoff Regan, Speaker of the House of Commons.

Both men spoke of the long-standing St. Kitts and Nevis and Canada relationship, and emphasized the need to pursue a deepened relationship, particularly as the Federation and Canada celebrates 35 years of diplomatic relations this October.

Foreign Affairs Minister Mark Brantley also held discussions with cabinet officials including the Hon. Dominic LeBanc, the Minister of Oceans, Fisheries and the Canadian Coast Guard as well as with the Hon. Ahmed Hussen, Minister of Immigration, Refugees and Citizenship. It was with the latter that the Foreign Minister concentrated on the all-important call for more people to people exchange through travel facilitation.

Mr. Brantley urged his Canadian colleague to work with St. Kitts and Nevis to remedy the problems associated with travel barriers. The Hon. Minister reminded his counterparts the relationship was anchored on family ties, trade and investment which reach back in time.

Both Ministers agreed that Kittitian and Nevisian, and indeed Caribbean diaspora, have contributed and continue to contribute to the economic and social fabric of Canada and pledged to work together to find convergence on this important bilateral issue.

During his meetings the Foreign Minister also used the opportunity to have an exchange of views on Canada’s leadership in the hemisphere and internationally on the critical subjects of oceans, climate change and de-risking – all issues of significant interest to small island states like St. Kitts and Nevis.

Minister Brantley congratulated his Canadian hosts on Canada’s successful staging of the G7 Summit. He also lauded Prime Minister Trudeau and Foreign Minister Chrystia Freeland for Canada’s progressive feminist foreign policy and international assistance as well as its signal for increased engagement with the Caribbean.