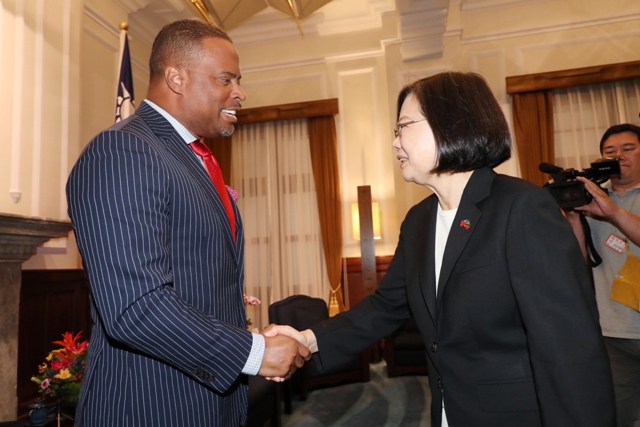 Hon. Mark Brantley, Minister of Foreign Affairs and Aviation in St. Kitts and Nevis and Premier of Nevis being received by Her Excellency Dr Tsai Ing-wen, President of the Republic of China (Taiwan)

SKN FOREIGN AFFAIRS (May 07, 2019) — Less than five hours after touching down at Taoyuan International Airport in Taiwan, Hon. Mark Brantley, Minister of Foreign Affairs and Aviation and Premier of Nevis had an audience with Her Excellency Dr Tsai Ing-wen, President of the Republic of China (Taiwan).

The President welcomed Minister Brantley, stating that the visit of the Prime Minister Dr. the Hon. Timothy Harris less than a month ago succeeded by Minister Brantley’s third visit to Taiwan, bears testimony to the strong bilateral relationship between the two countries.

“Our relationship has grown from strength to strength and we continue to achieve amazing things together”, the President stated through an interpreter.

The President referred to the challenges Taiwan continues to experience but is resolute, “Taiwan will not back down.”  In the same vein, President Tsai acknowledged the support of St. Kitts and Nevis globally and requested that it be maintained.

Minister Brantley in his response, while thanking the President for her time, also expressed that this too signalled the value her government places on the relationship.

The Foreign Minister lauded Taiwan for the advances it has made in health, technology and energy, and that it stood tall as a beacon.

Minister Brantley capitalised on the opportunity to thank Taiwan’s leader for its model assistance to the national development agenda of the Federation, especially in the areas of agriculture, education, energy, health, Information and Communications Technology and security.

The Minister made special mention of the many students who have been able to pursue higher education through the Taiwanese Government’s flagship Scholarship Programme. President Tsai indicated that Taiwan is open to receiving more students including in the vocational field.

The meeting afforded the opportunity to explore other areas for cooperation in the business sector.  Minister Brantley said that while other sectors have been doing well, he believes that private sector investment is “the next step in the evolution of our [longstanding] relationship”.

The President welcomed the idea and immediately organized for the St. Kitts and Nevis top diplomat to meet with members of the private sector to continue to explore possibilities.

Minister Brantley and his delegation are scheduled to meet with some students at 3:00 p.m. today to be followed later with a meeting with the ICDF and dinner with H.E. Dr David Lee, Secretary-General of National Security Council.