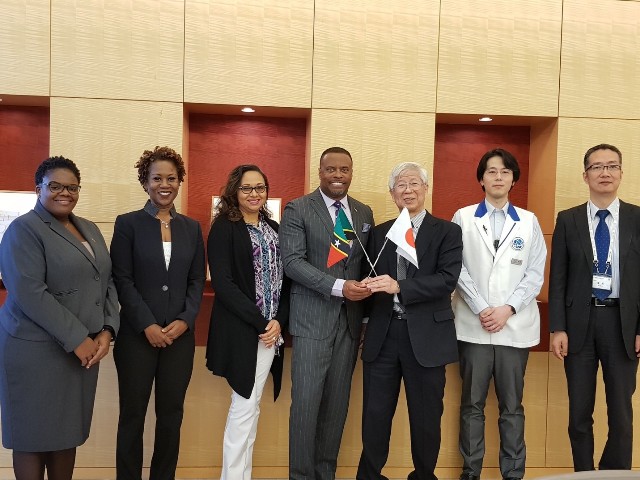 (Fourth from left) Hon. Mark Brantley, Minister of Foreign Affairs and Aviation with (third from right) Mr. Shoichiro Katayama, Executive Director of the National Museum of Emerging Science and Innovation (Miraikan) ‘Future House’ in Japan on November 02, 2018. Looking on are (l-r) Ms. Shanelle Simmonds, Foreign Service Officer; Her Excellency Jasmine Huggins, St. Kitts and Nevis Resident Ambassador to the Republic of China (Taiwan); and Mrs. Sharon Brantley, wife of Mr. Brantley and (on the extreme right) other staff at the museum

November 02, 2018 (Ministry of Foreign Affairs) —  St. Kitts and Nevis’ delegation led by the Minister of Foreign Affairs and Aviation, Hon. Mark Brantley visited the National Museum of Emerging Science and Innovation (Miraikan) ‘Future House’ where he met with the Executive Director Mr. Shoichiro Katayama and his team to discuss the importance, role, potential of science and technology and the advancements Japan has made in using innovative ways in designing a technological sustainable future.

After the discussions, the delegation was invited to a tour of the museum which featured the latest technologies including robotics, geo tools, space exploration, global environment, health and research, and the use of technology in disaster preparedness.

Minister Brantley expressed his appreciation for the tour of the museum and underscored the relevance of science and technology to the development of St. Kitts and Nevis.