A section of women attending the Pre-International Women’s Day Symposium hosted by the Social Services Department at Mount Nevis on March 5th, 2013
NIA CHARLESTOWN NEVIS (March 06, 2013) — Junior Minister of Social Development in the Nevis Island Administration (NIA) Mrs. Hazel Brandy-Williams, called for solidarity among the women of Nevis in their efforts to end violence against women and to champion the cause.

The Minister’s remarks came when she addressed a room filled with women from a cross section of the Nevis Community at a Pre-International Women’s Day Symposium, organised by the Gender Division of the Social Services Department on March 05, 2013, at the Mount Nevis Hotel.

“Let us use today as a new beginning to embark upon and to forge ahead your campaign, as we build on progress made.

“There must be adjustments as we celebrate acts of courage and determination by ordinary women who have played extraordinary roles in the history of our communities and country,” she said.

Mrs. Brandy-Williams noted that addressing the women gave her a great sense of pride and humility knowing that they could collaborate in such a forum, the pre-International Women’s Day activity, which afforded an opportunity for the discussion of critical issues related to women and their development.

This year’s United Nation’s celebration of International Woman’s Day will be held under the theme: “A Promise is a Promise: Time for Action to end Violence against Women” and Minister Brandy-Williams said the Department looked forward to Friday’s celebration.

Notwithstanding, she explained that based on the theme it was evident that in recent times tremendous progress had been made in the protection and promotion of women’s rights however, there was still a clarion call for all stakeholders to take further action. 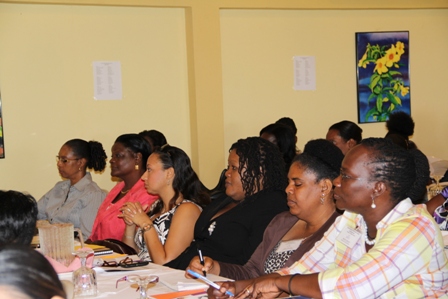 “It is with this in mind, therefore, that we are here today to interact and put our collective thoughts and ideas together with the aim of developing a workable action plan or White Paper to guide the way forward for Nevisian Women,” she said while she implored the participants to participate fully and unselfishly as they shared their ideas in what she considered as a very important cause for women.

“Violence against women and girls is a gross human rights violation that disrupts and dismantles families and communities and impeded our overall development. It also has tremendous social economic and productive cost for individuals, families and by extension countries, Nevis being no exception,” she added.

In conclusion, the Social Services Development Minister stated that it was the Ministry’s hope that the information imparted during the session would inspire all present to recommit themselves to strengthening accountability and changing the culture to bring an end to violence against women in Nevis.